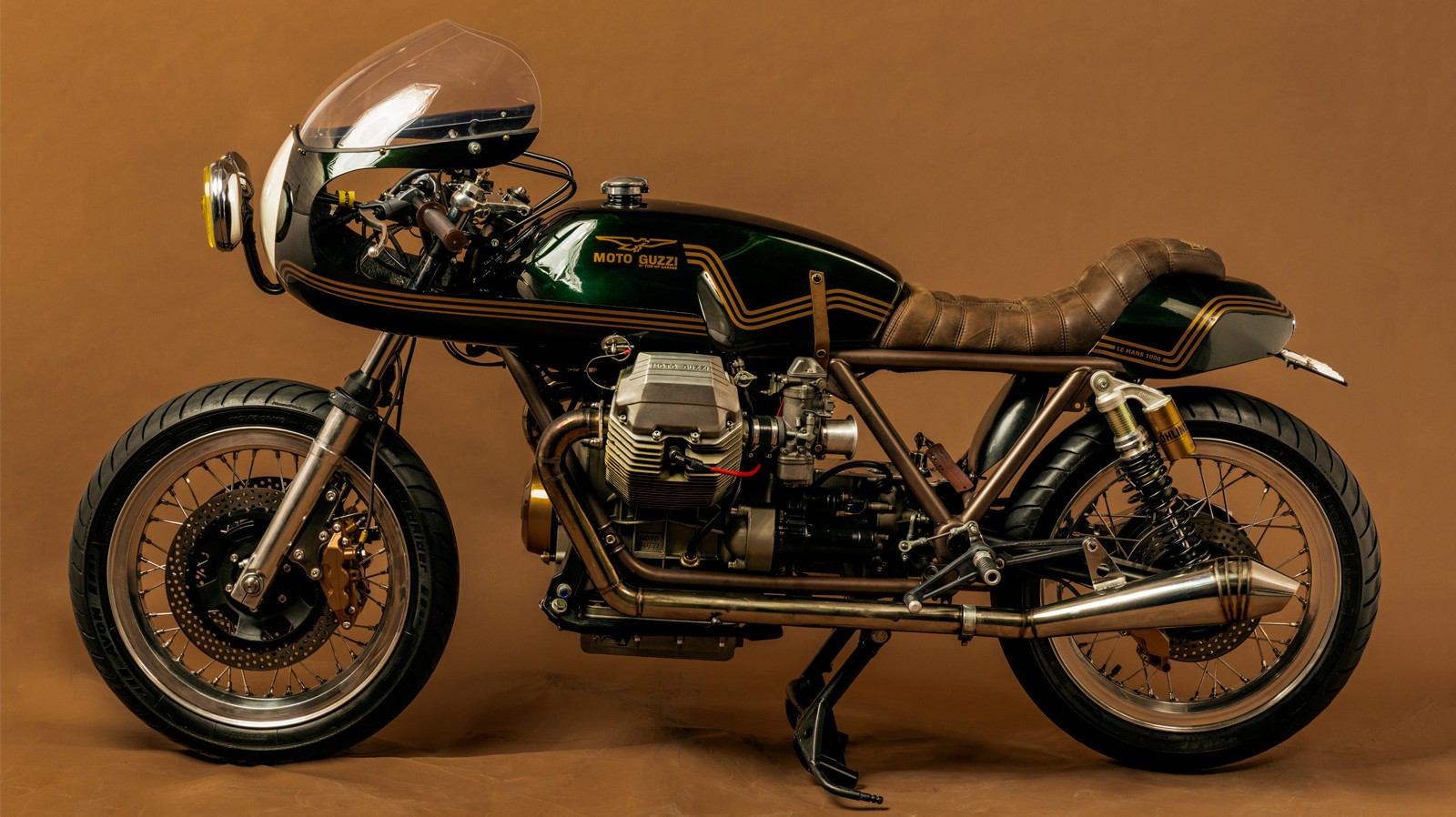 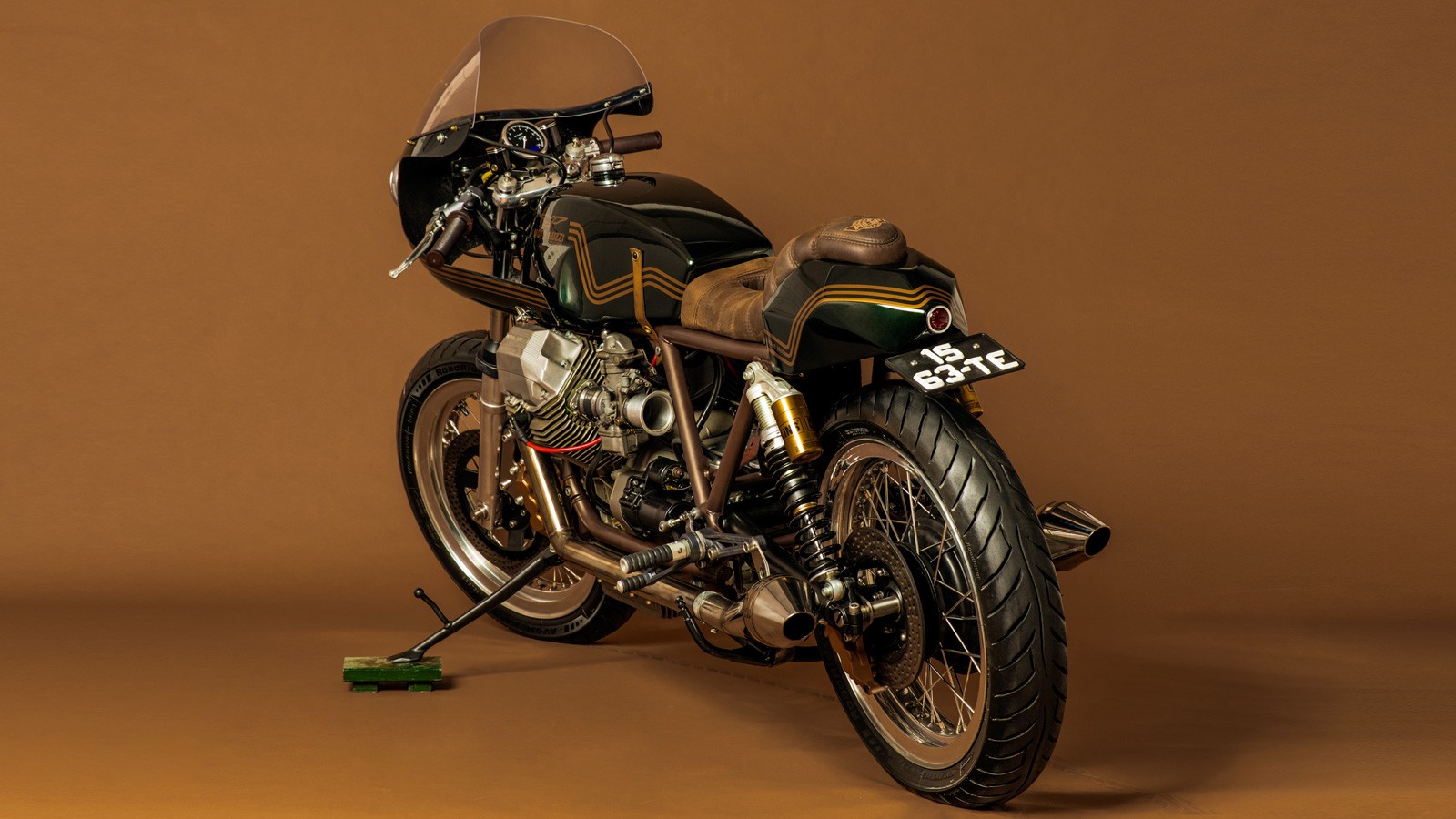 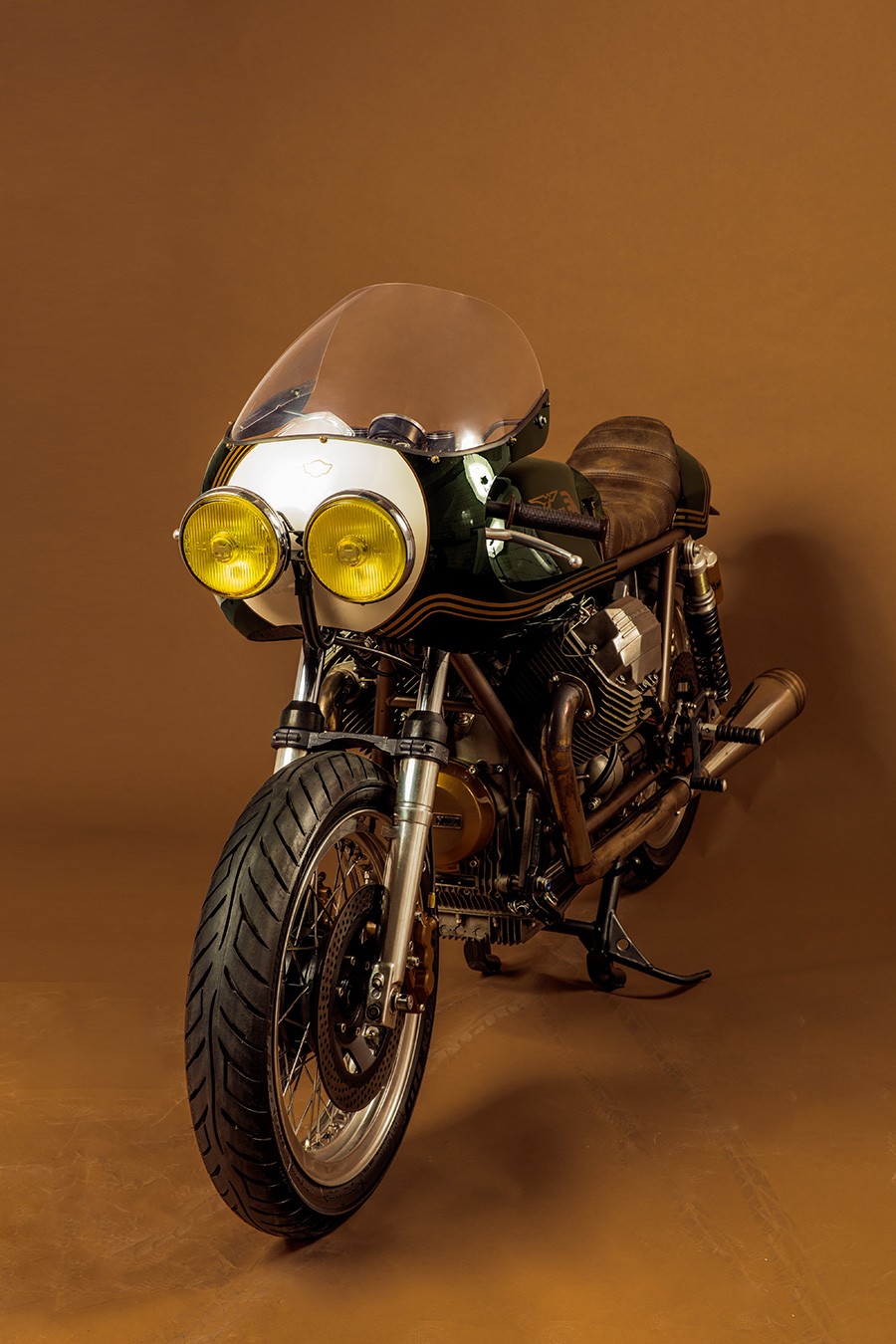 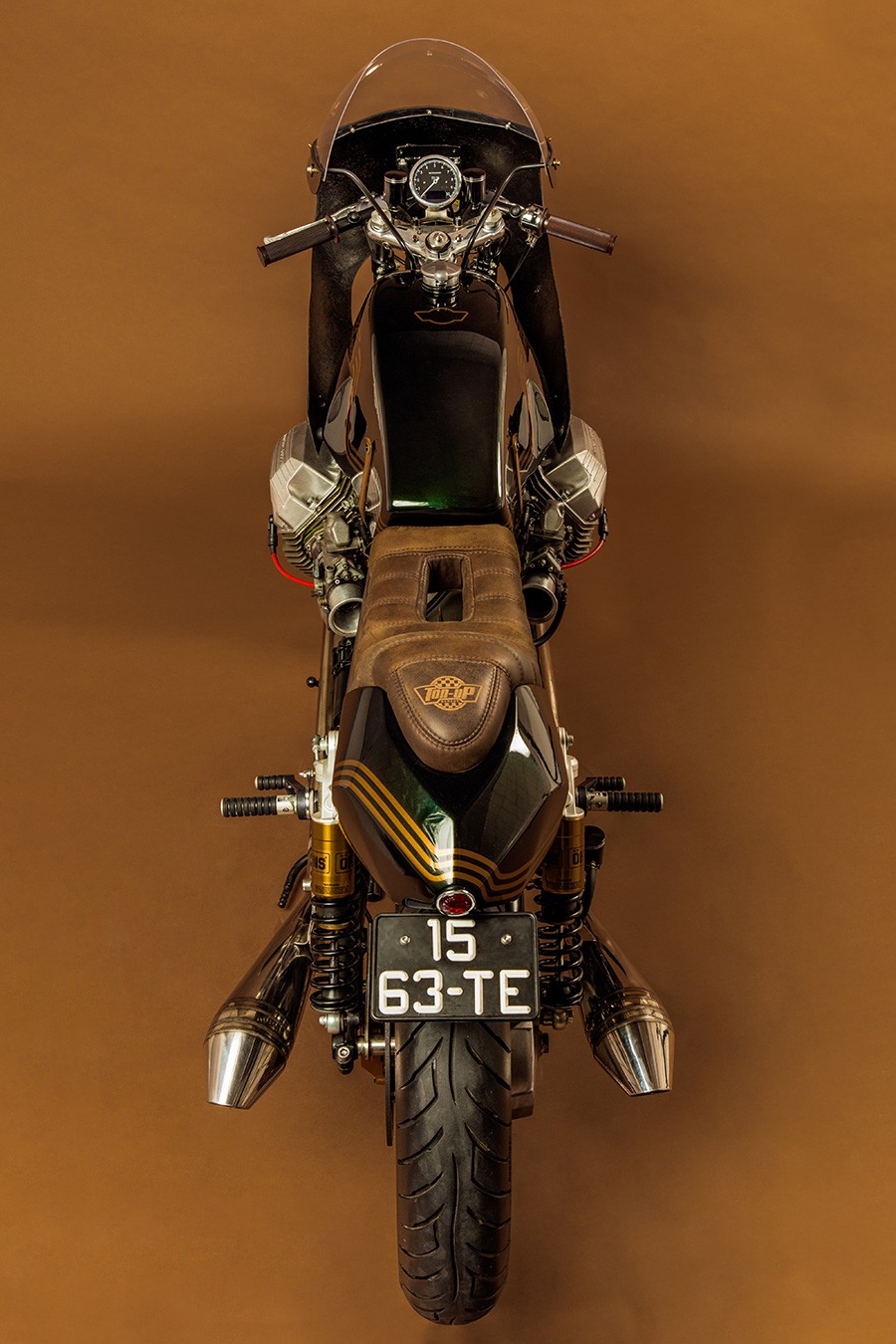 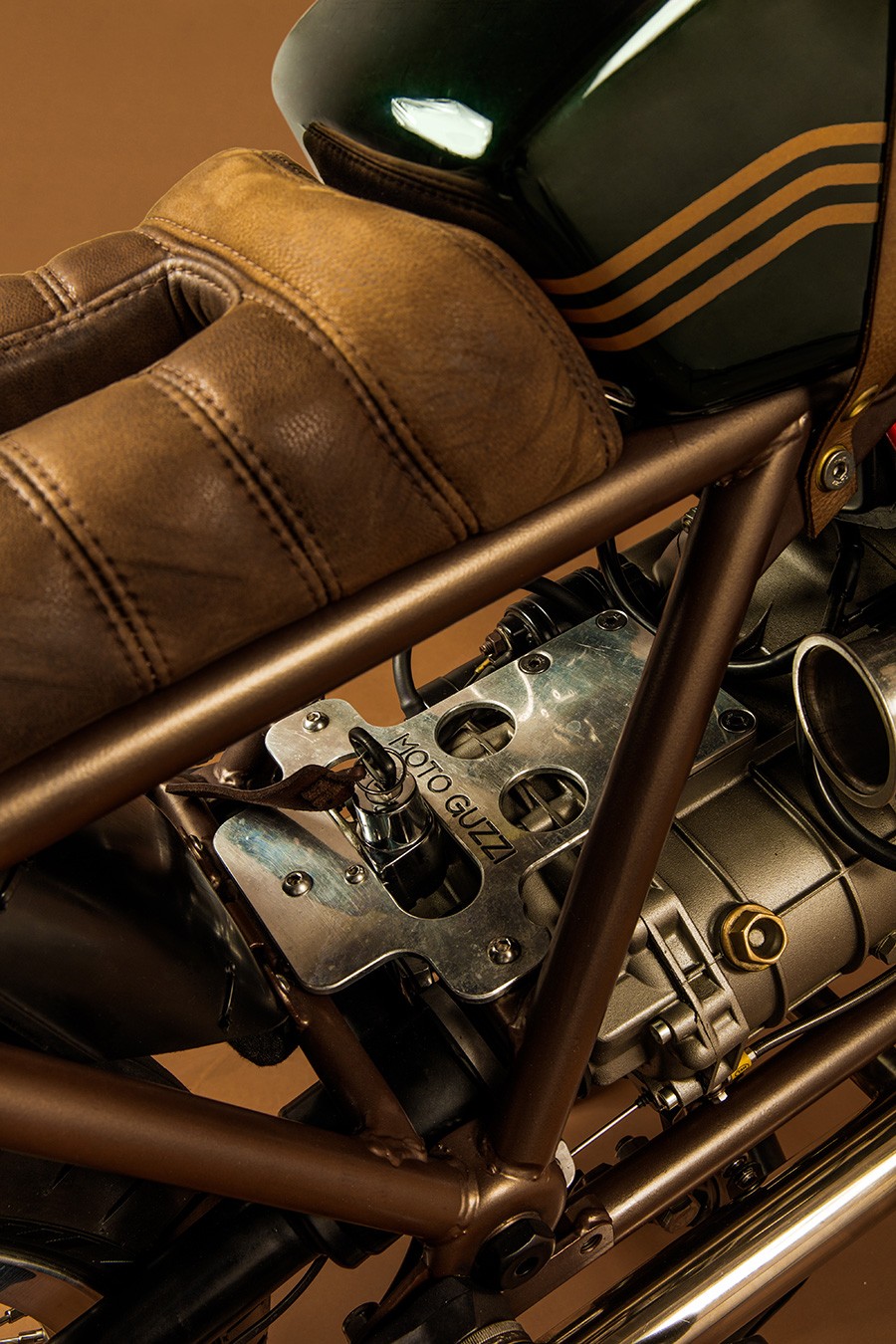 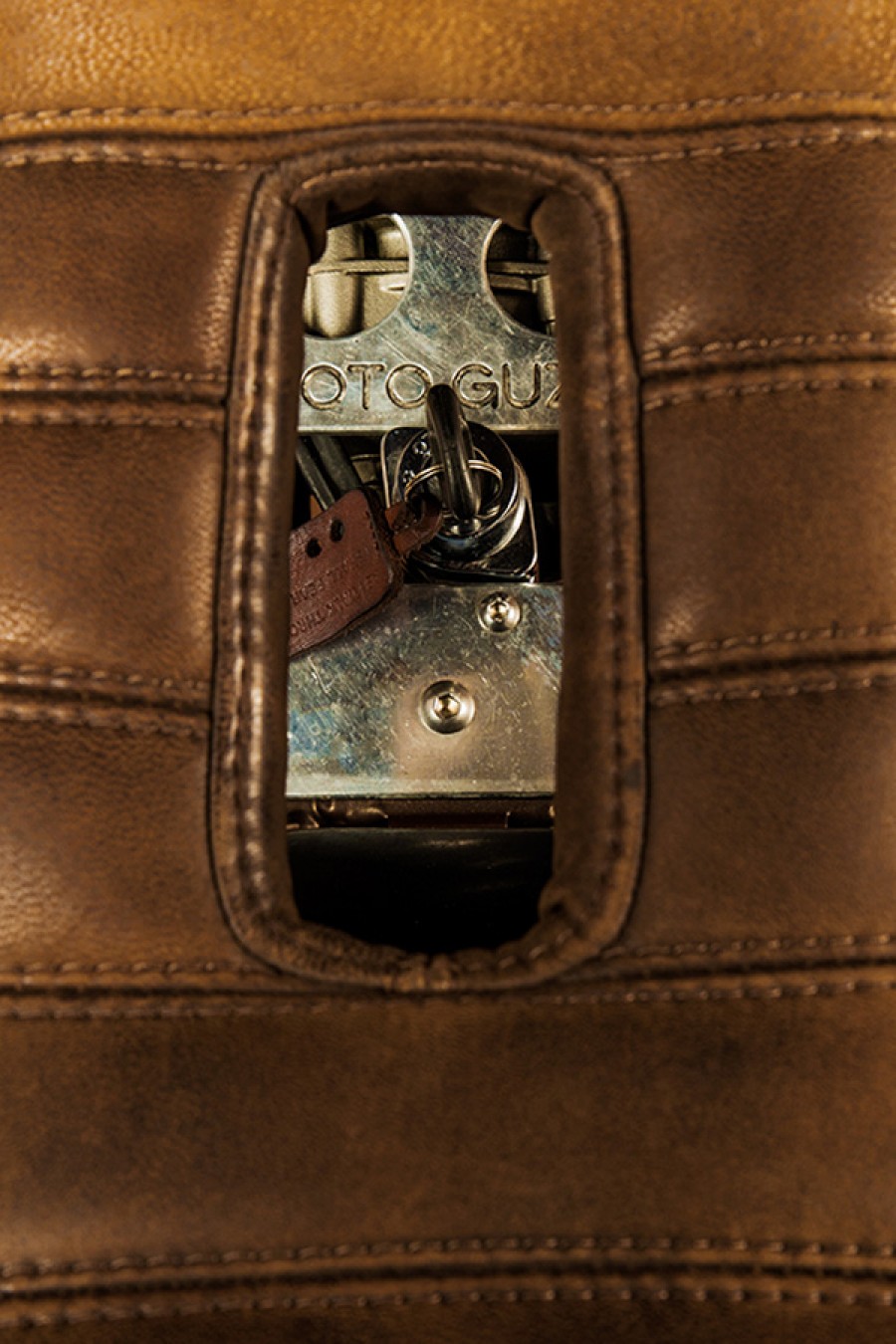 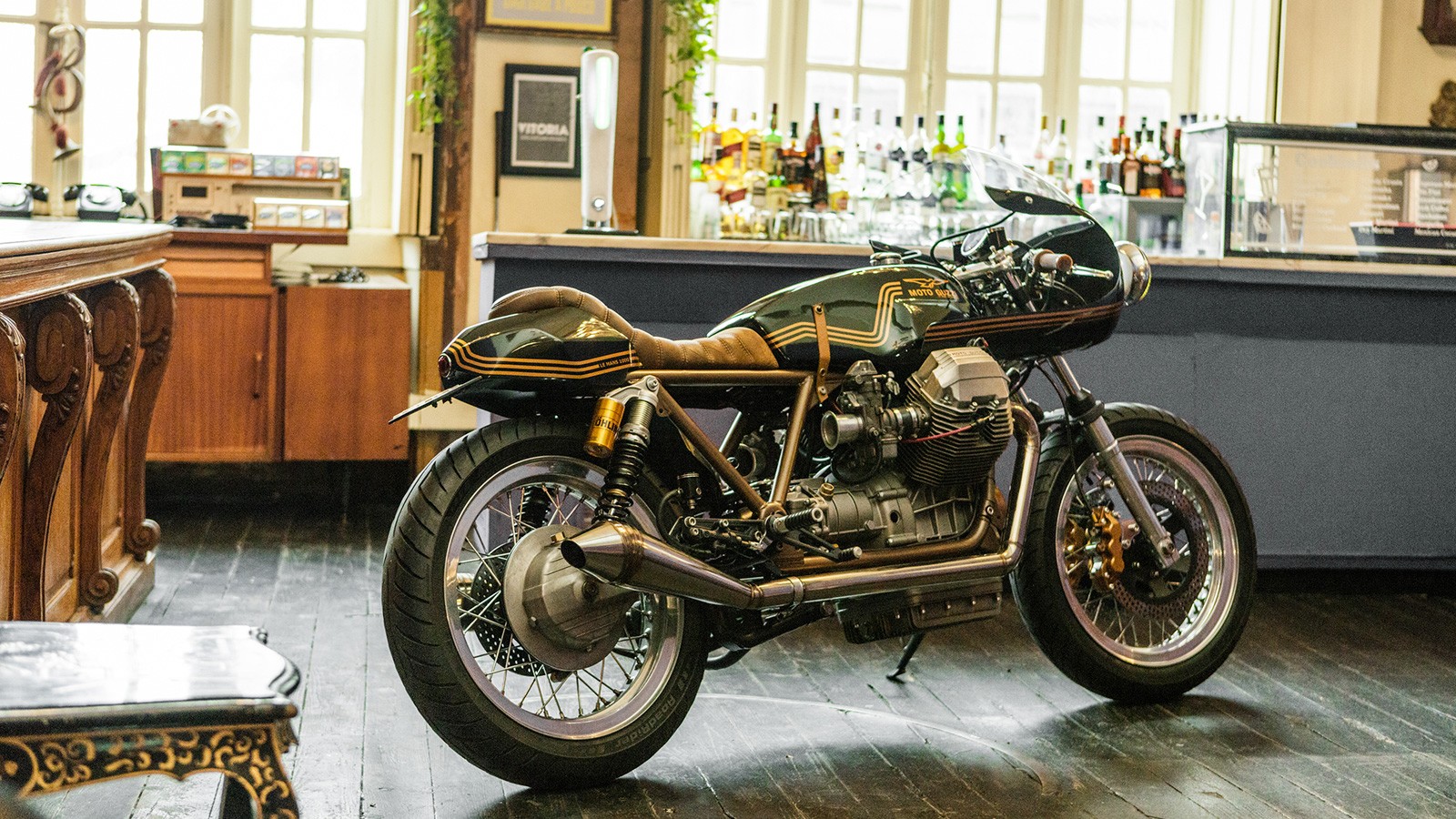 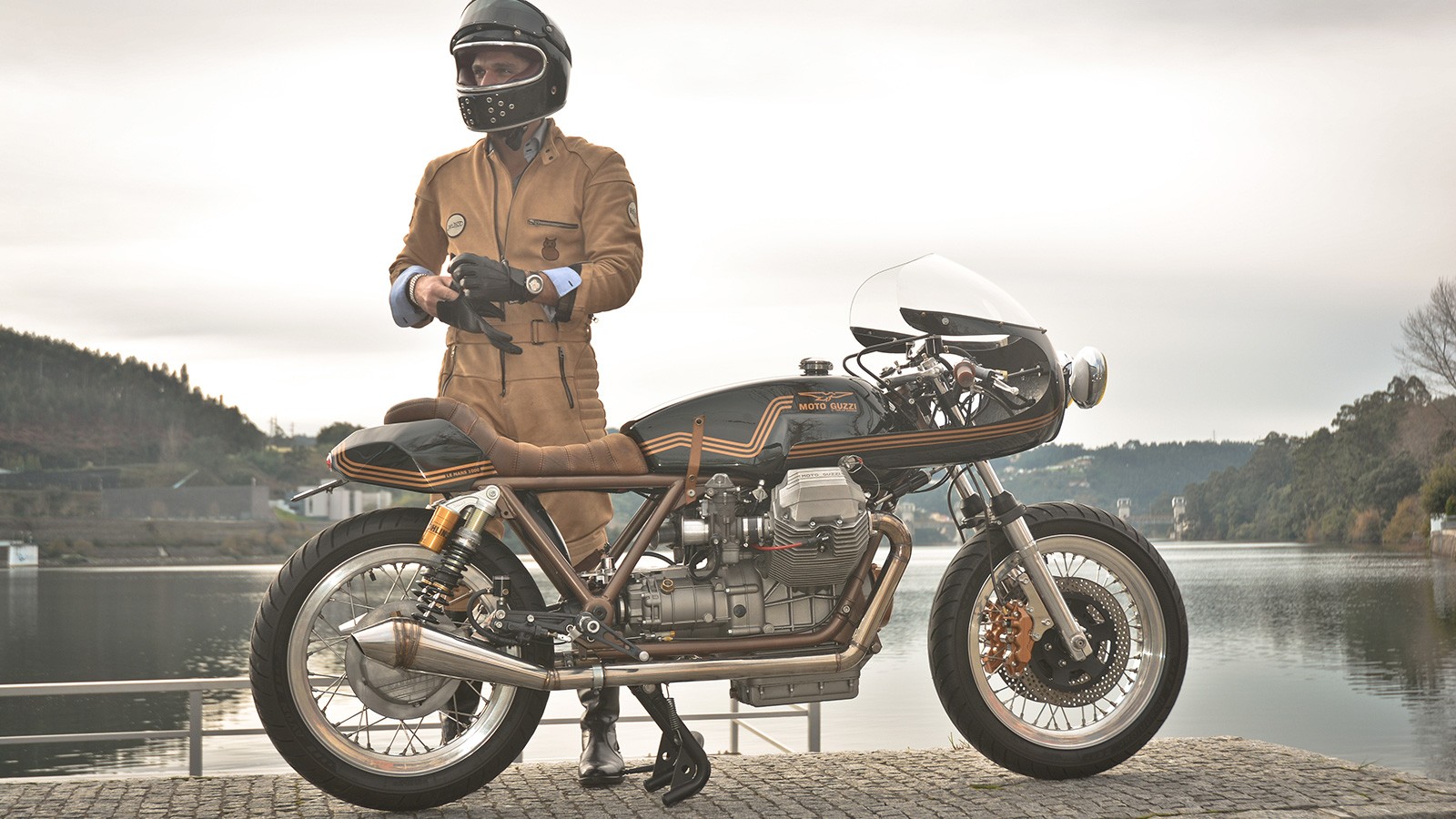 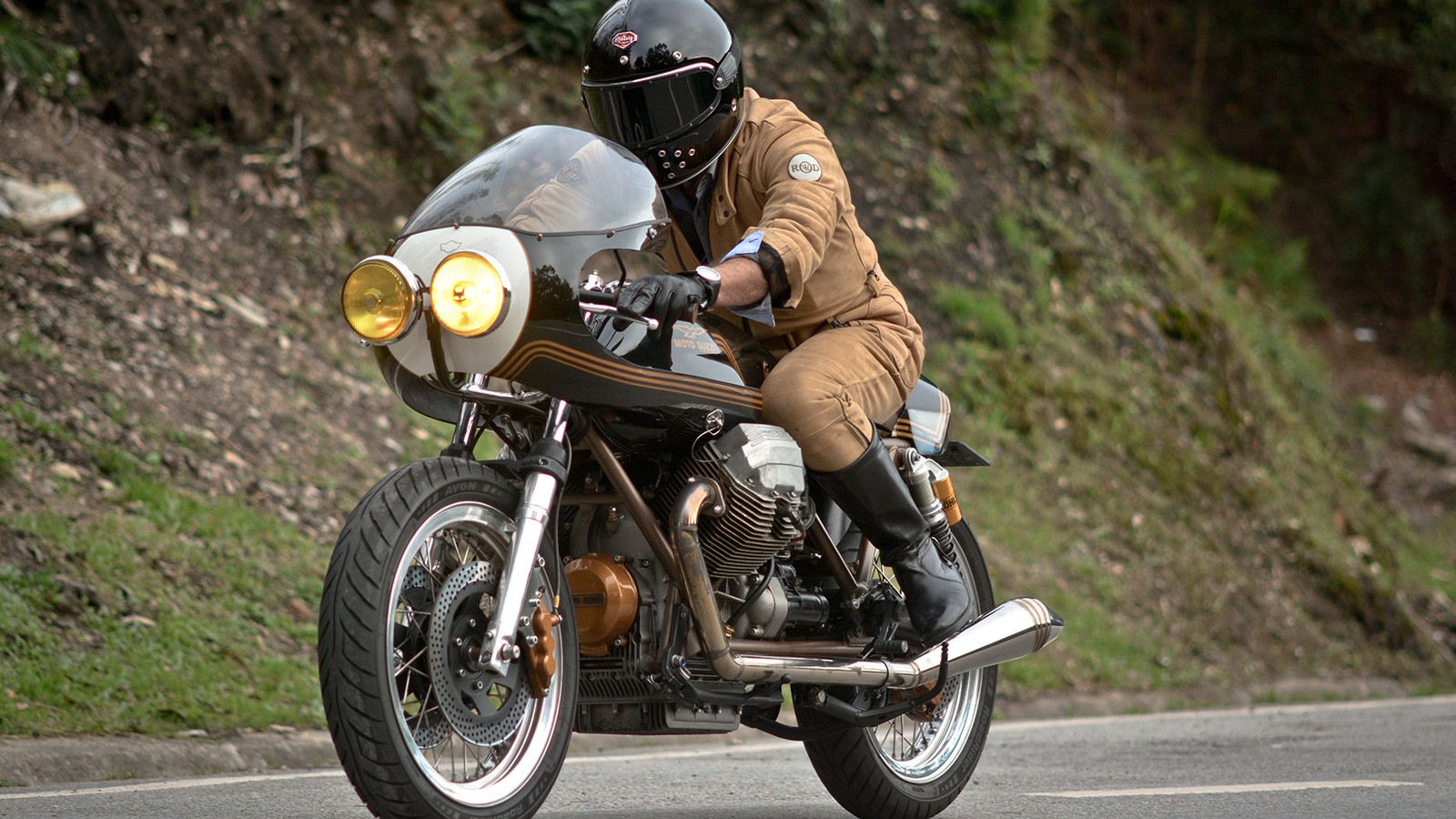 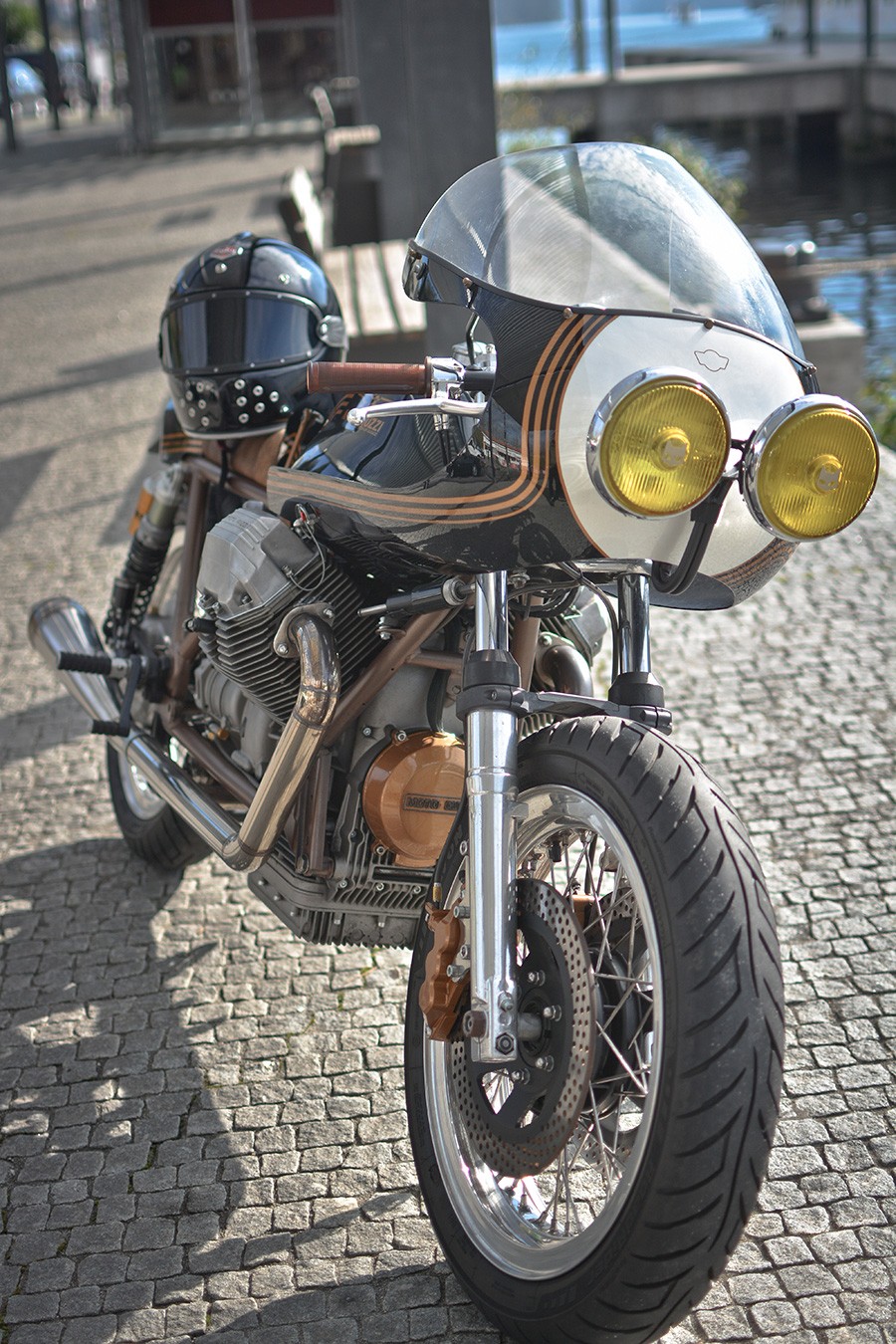 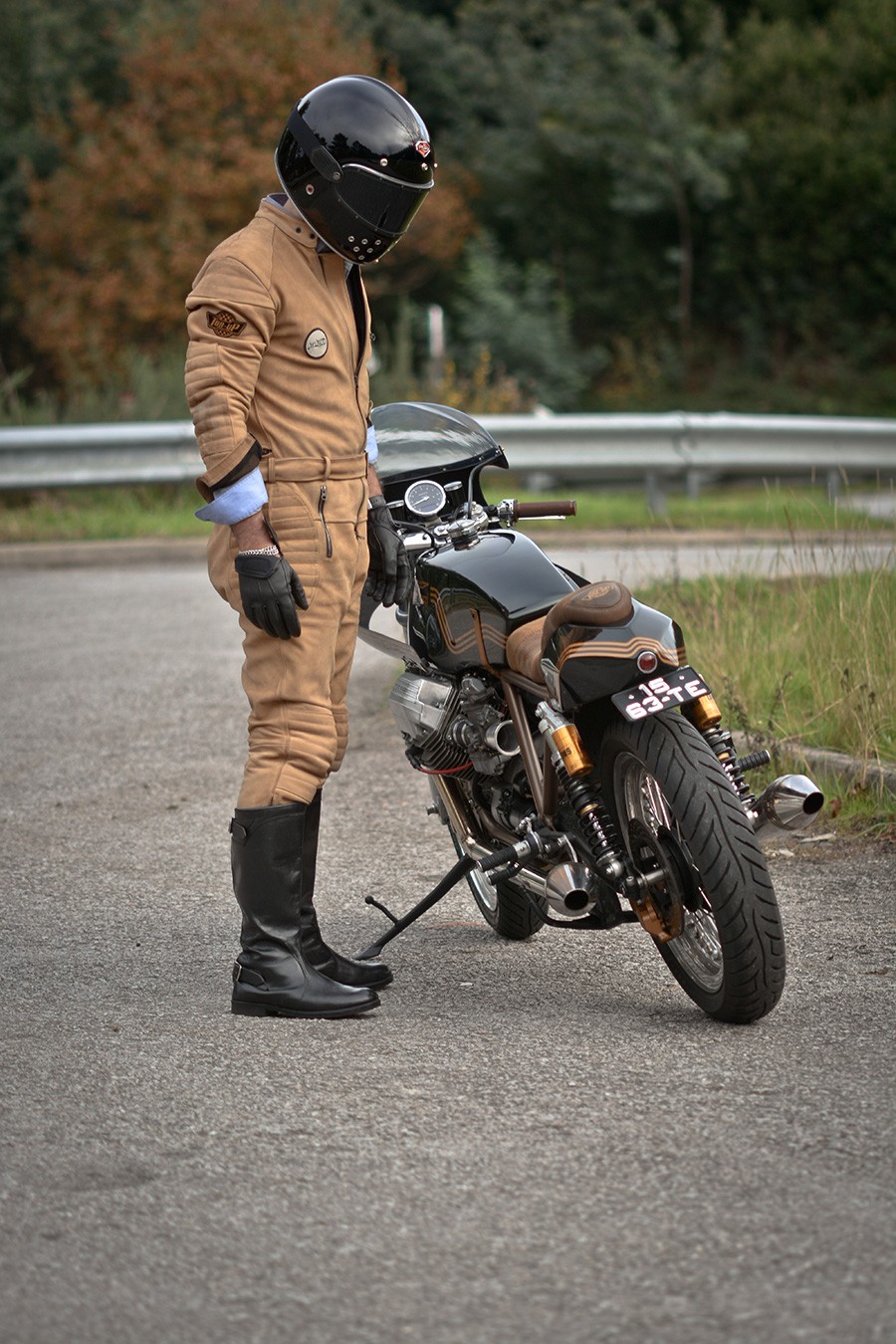 Speed, racing, engine grunt,... This says a lot from us at Ton-up Garage. We love beautiful things, mechanical stuff and it's clear to us that the racing spirit runs in our veins. We don’t mind getting dirty: be it working on projects at the workshop, covered in mud on off-road on dirt- tracks, or simply when our goggles get smudged while cruising through beautiful mountain and country roads over the weekends. The latter, is hardly more enjoyable than when riding a Guzzi Le Mans, one of those bikes that awakens emotions and continuously pushes you to go faster and faster...which it is. The goal on this bike was to bring back to life the old Guzzi racing pedigree, along with refined aesthetics where racing and classic style would come together, allowing for some heart pumping rides to be pulled from this old lady. It has the same character of the old Guzzis back in the days and it was an interesting challenge for us to tune this bike and turn it to what it is now, the Guzzi Le Mans.

First time we tested it, it seemed the engine just kept on revving with a really strong torque: we knew right there and then this one was on its way to become what we were aiming, a fast classic bike. We've heard before about those strong old engines from Guzzi, but never had the opportunity to really feel them, until we tried the Guzzi Le Mans that is...The inspiration came from the Old Endurance race bikes whose headlights stood outside the race farings. Guzzis are originally quite long bikes, so we've redesigned this version to be more fluid and long like its ancestors. We've built a longer fuel tank and built the battery compartment inside/beneath it. The seat was also designed with a hole on the middle to access the ignition key when you're riding it.

To really get a feeling of what it could do, we were forced to enter some illegal street races and we can honestly attest the bike smashed some “new bikes on the block” and recent classic models, showcasing once again that age doesn’t mean a thing. It's now been handed down to its rightful owner, a thrill seeking rider who loves strong emotions and riding fast just as much as we do.

We've fitted the fairings to go with the longer fuel tank and built the seat cowl in metal in the back. Fitted 2x Marshall headlights and taillight. We've rebuilt all the electric wiring and replace some old parts for new ones, lithium battery, Motogadget electrics, alternator, etc. We've rebuilt both wheels, fitted borrani rims with stainless spokes and Avon Tires. Controls came from Tarozzi, both rear sets as clip ons, these lasts covered with classic Ariette grips. We've built the entirely exhaust system to go along with all the performance work done on the engine. It went up to 1000cc, race carbs, electronic ignition and the bike got a new grunt. Good acceleration with a lot of strength and powerful engine.