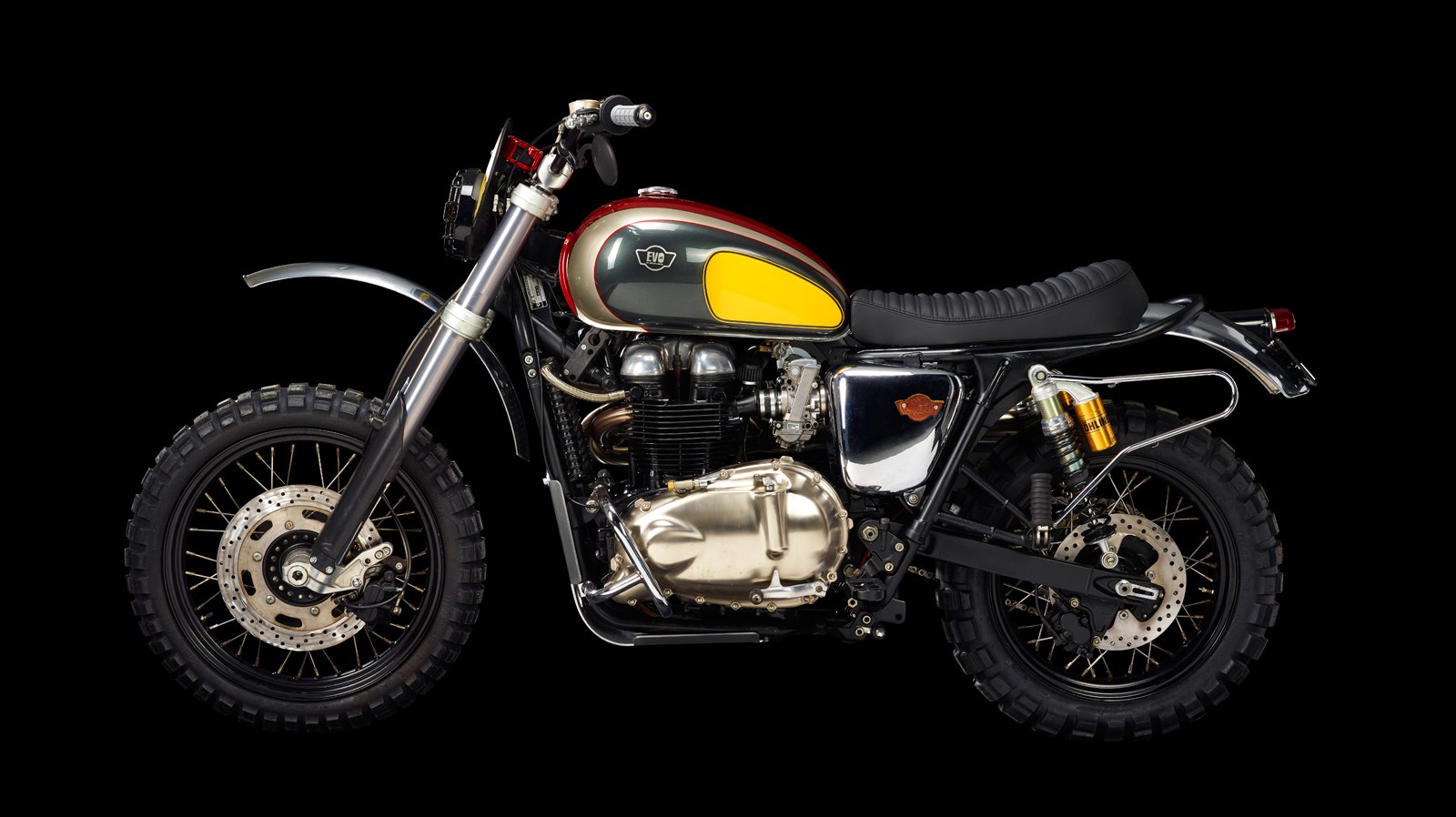 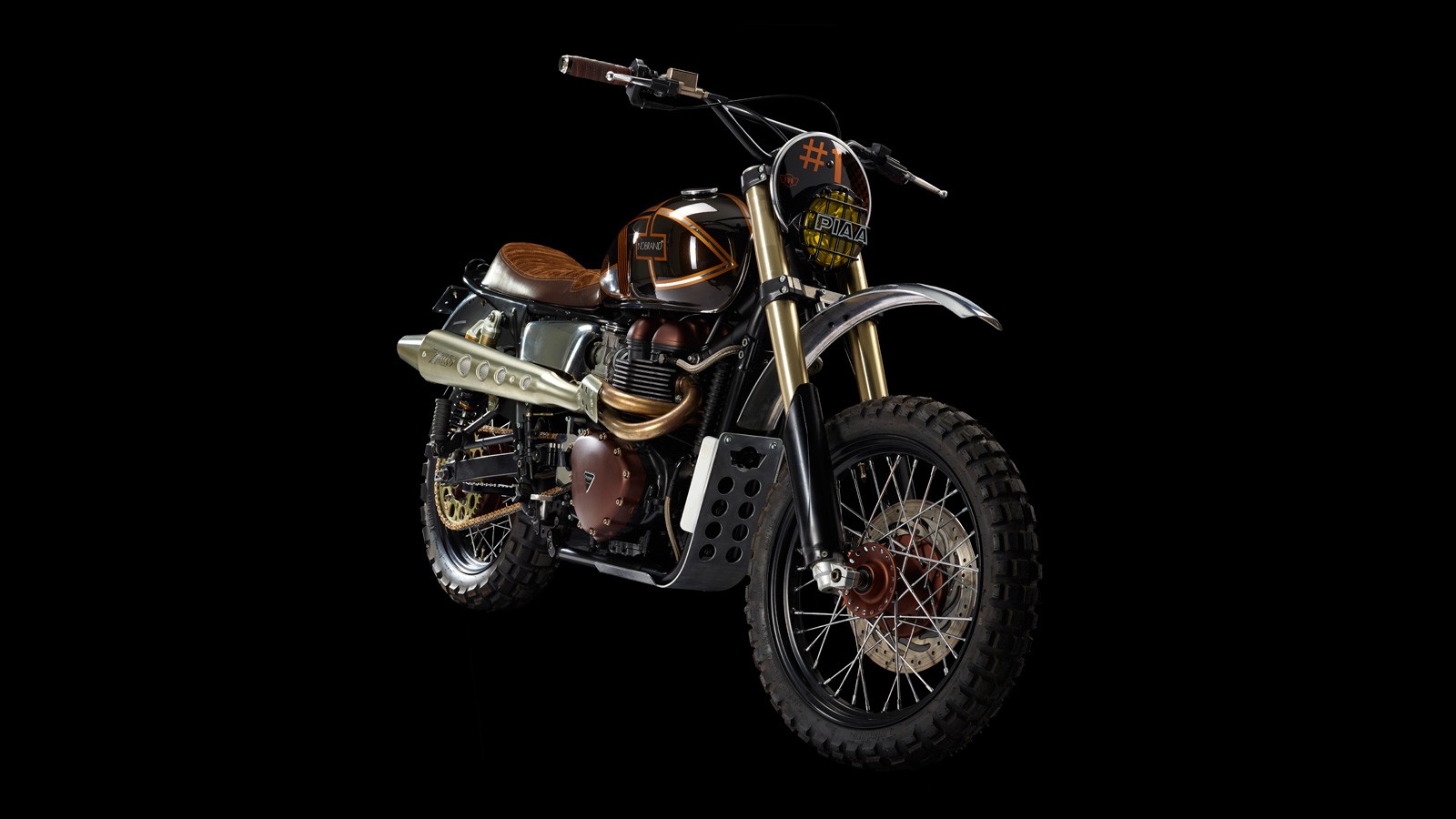 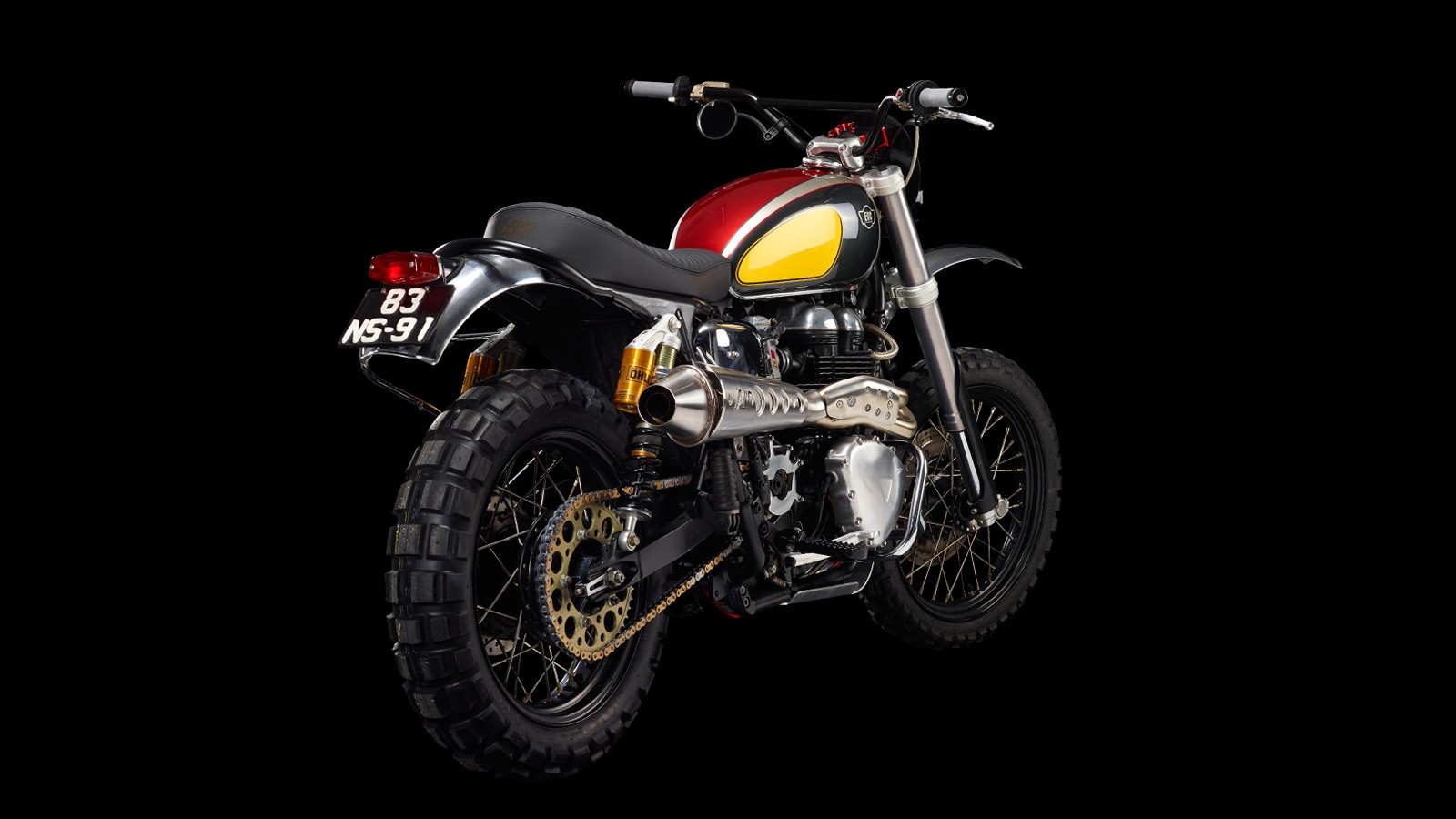 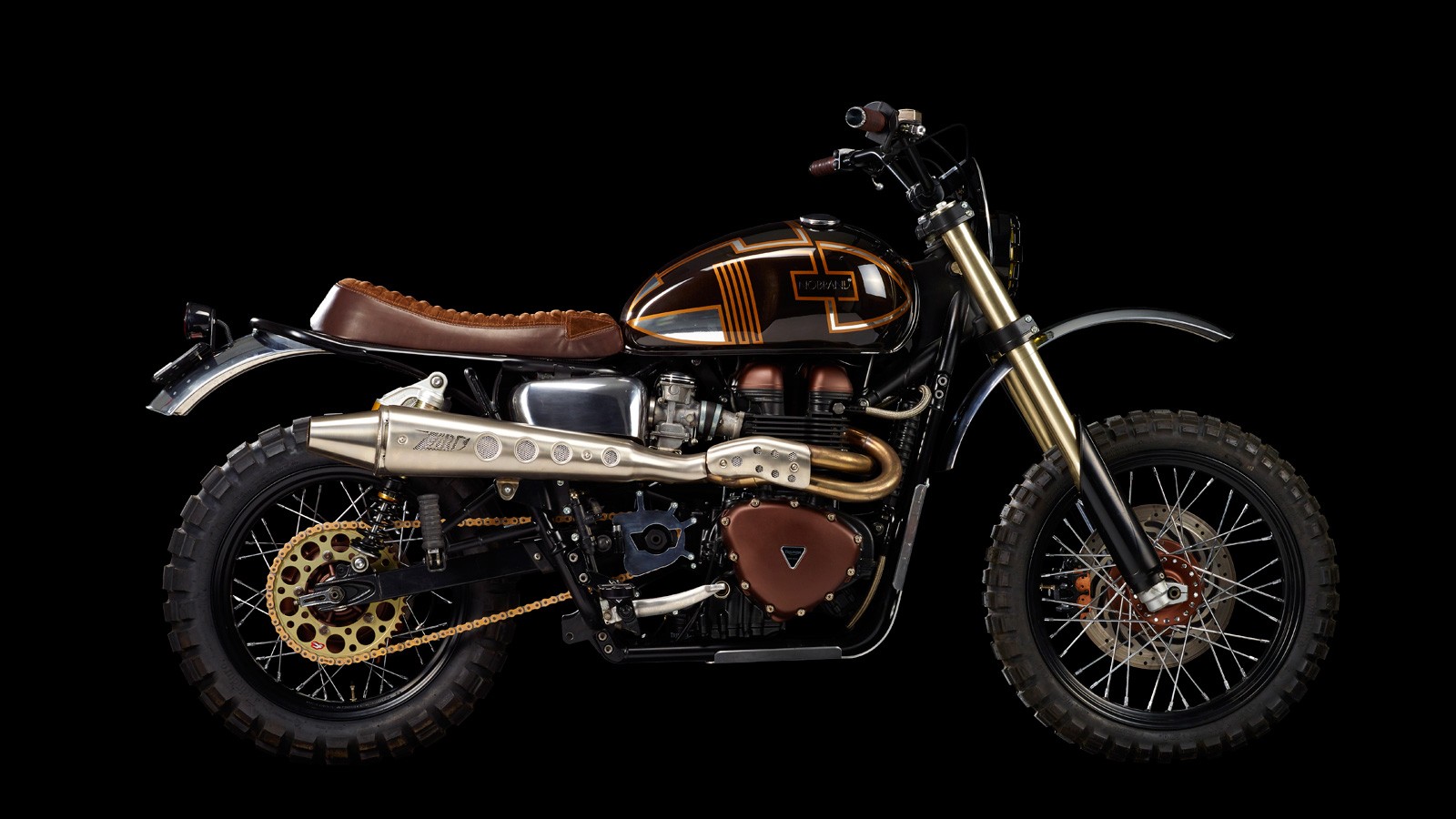 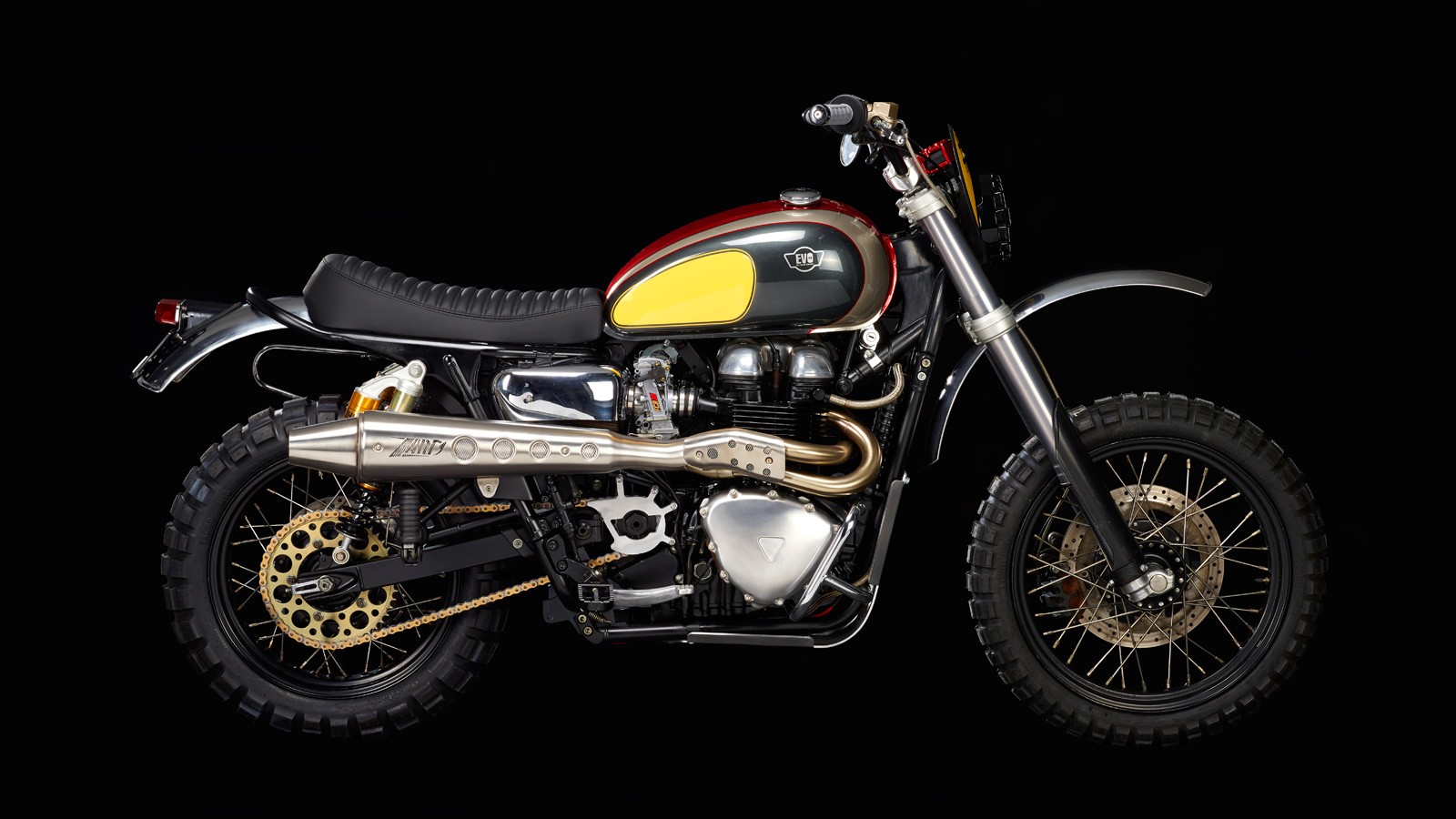 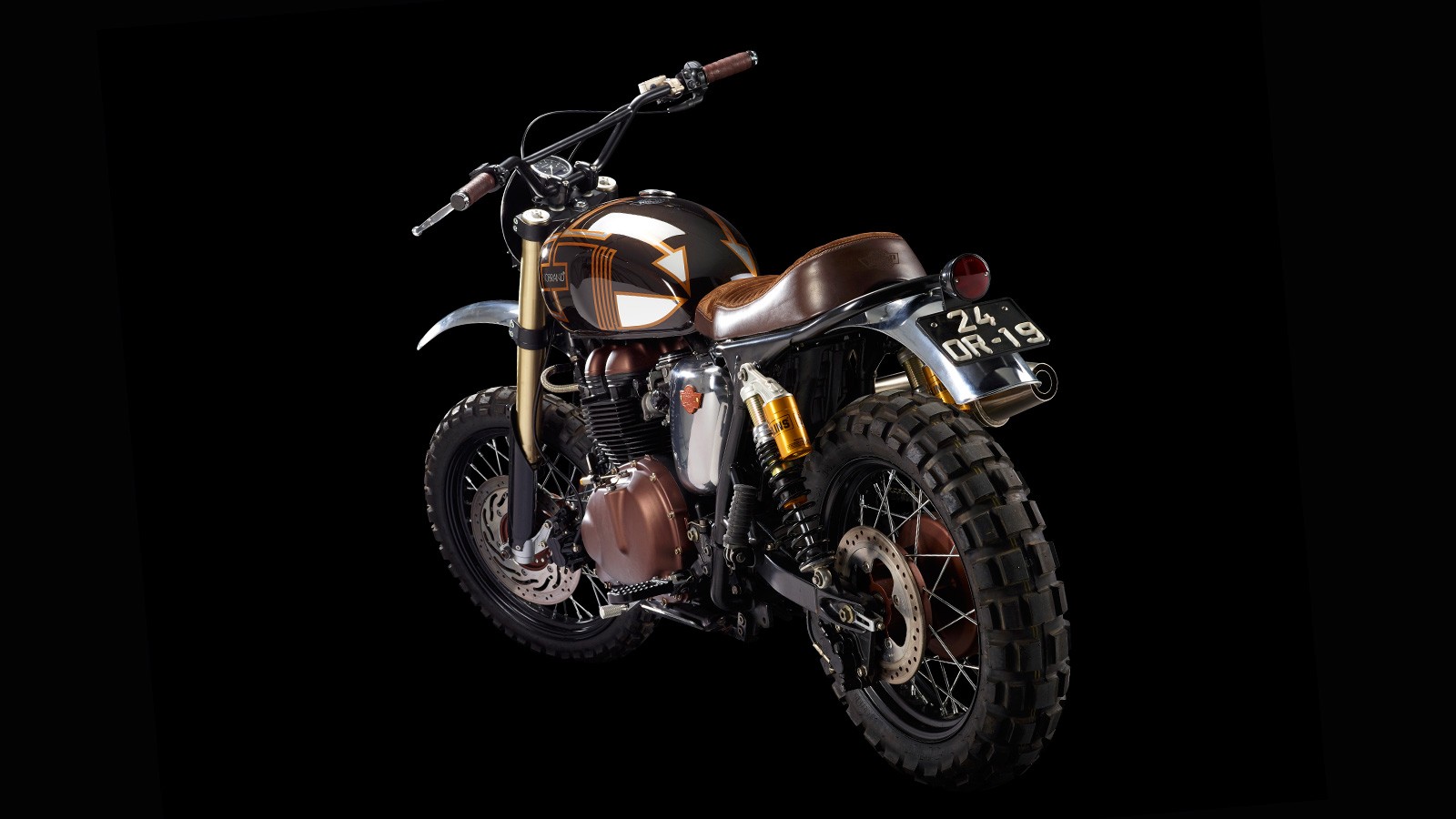 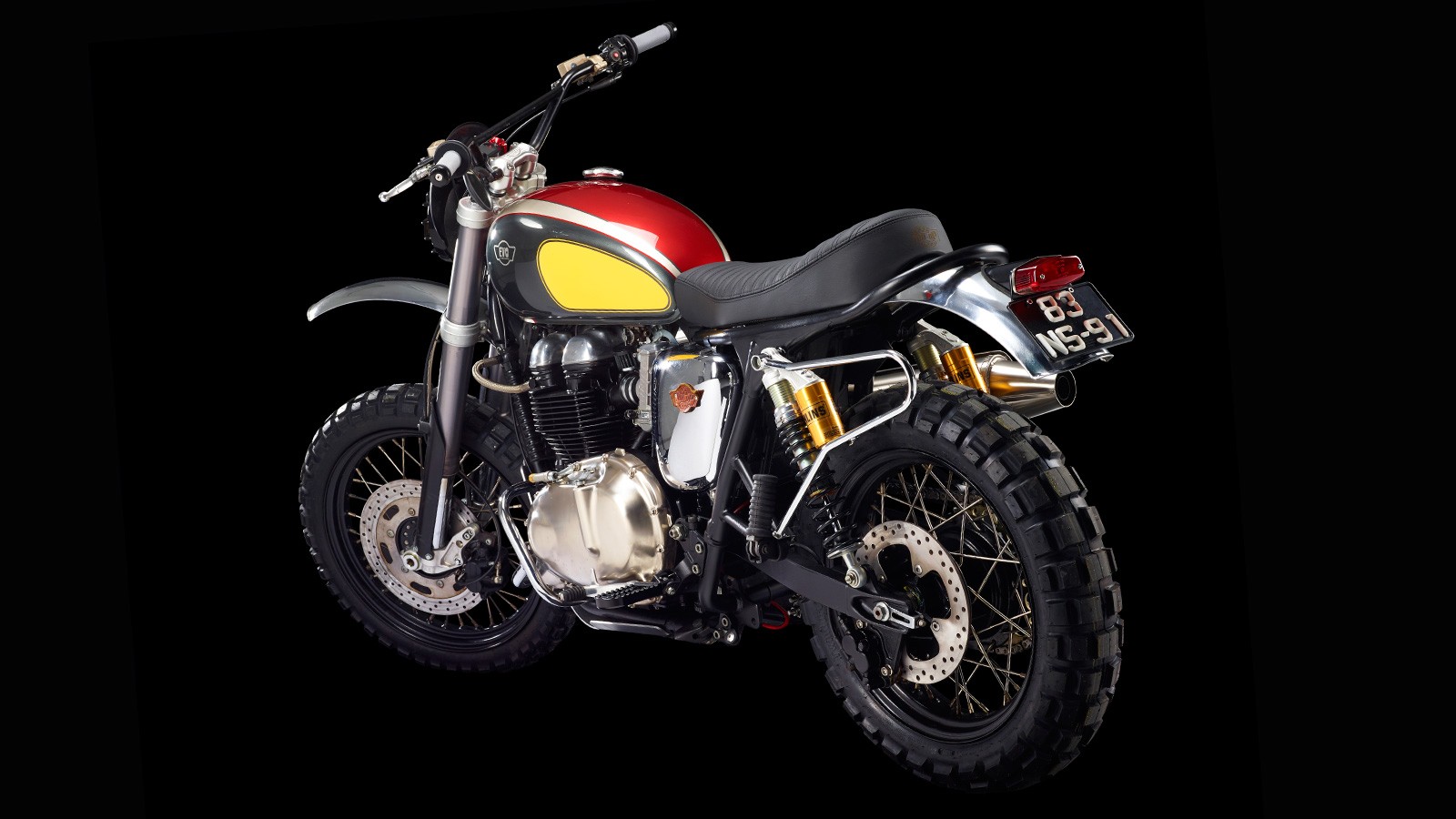 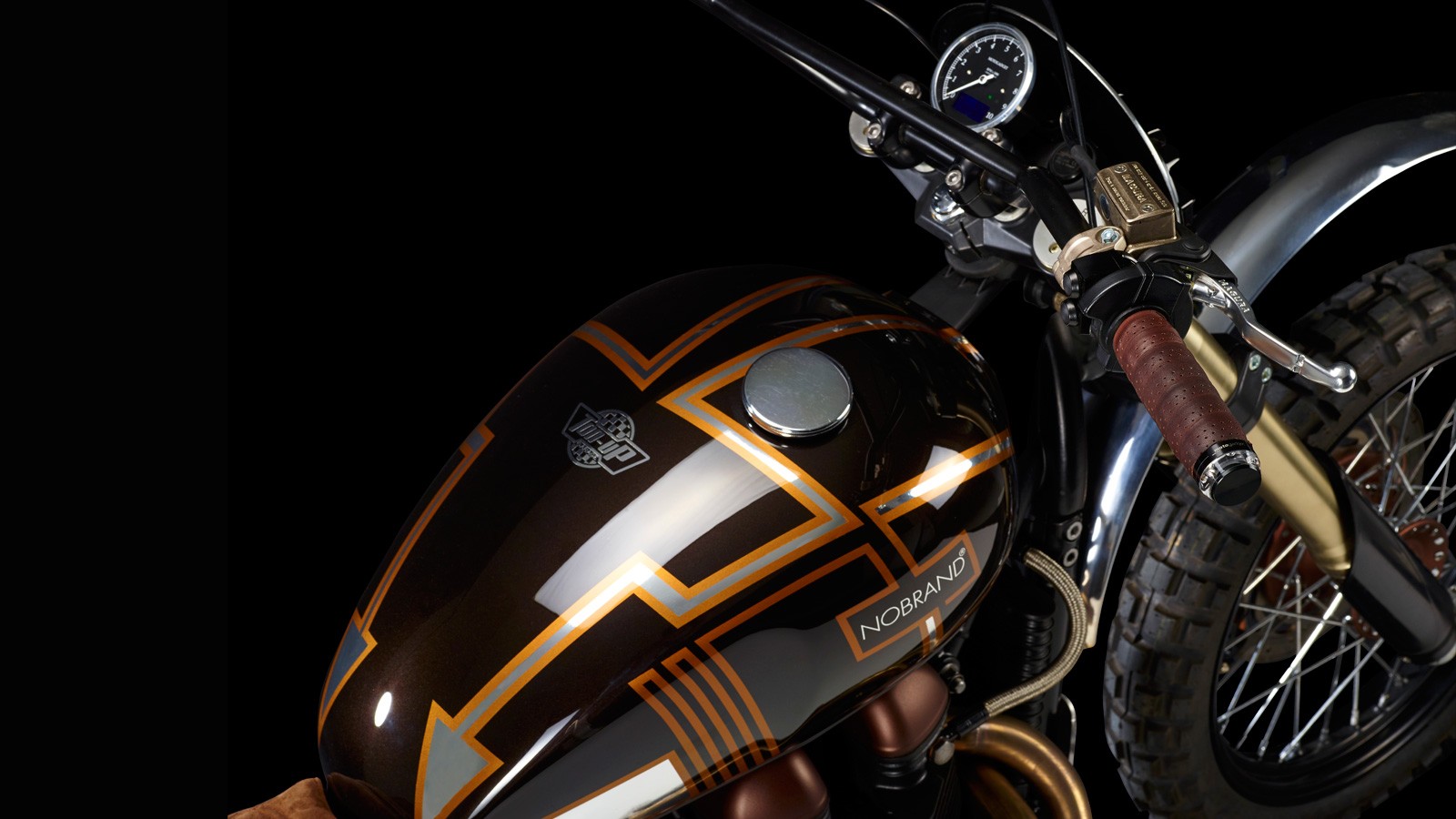 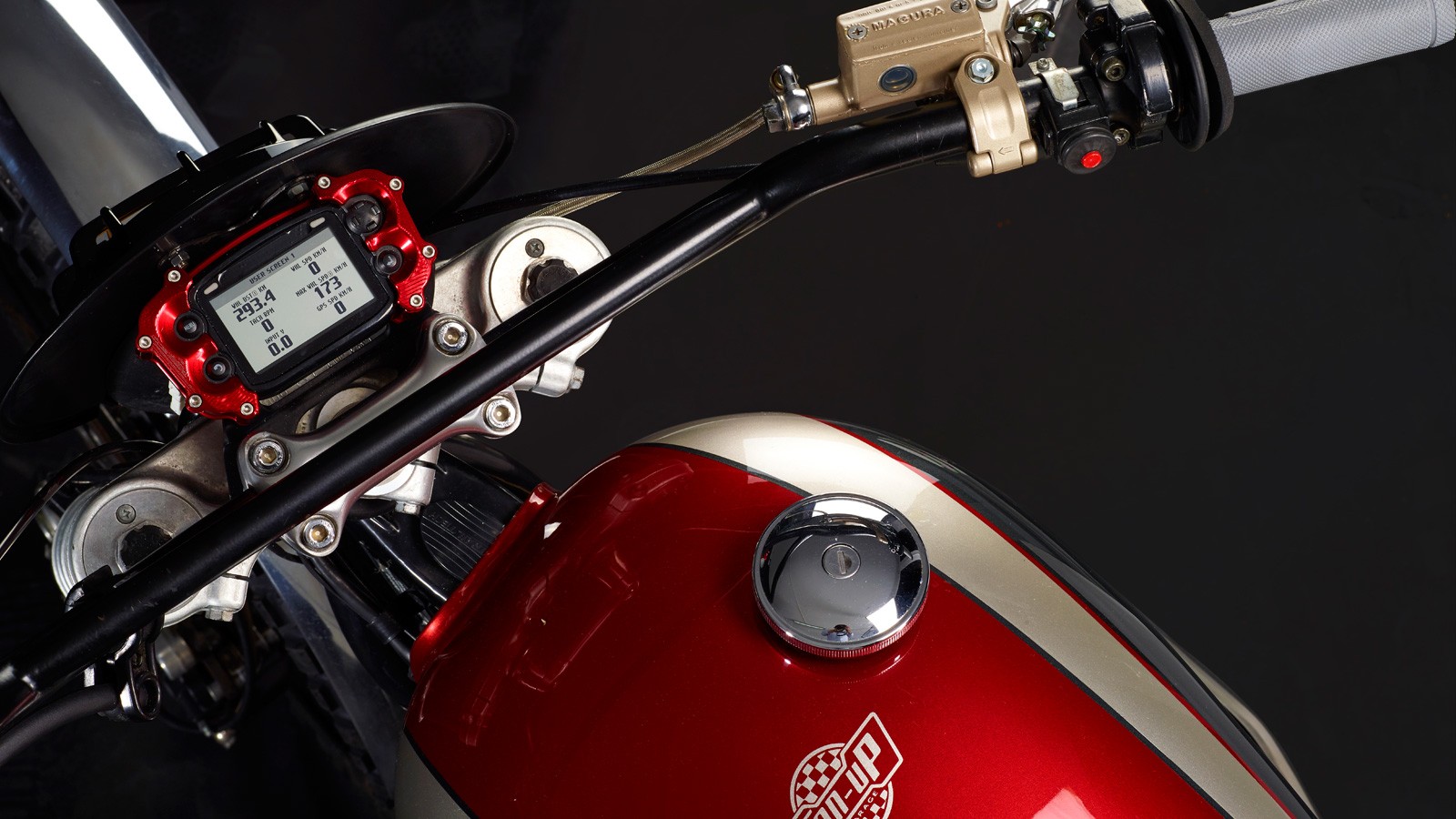 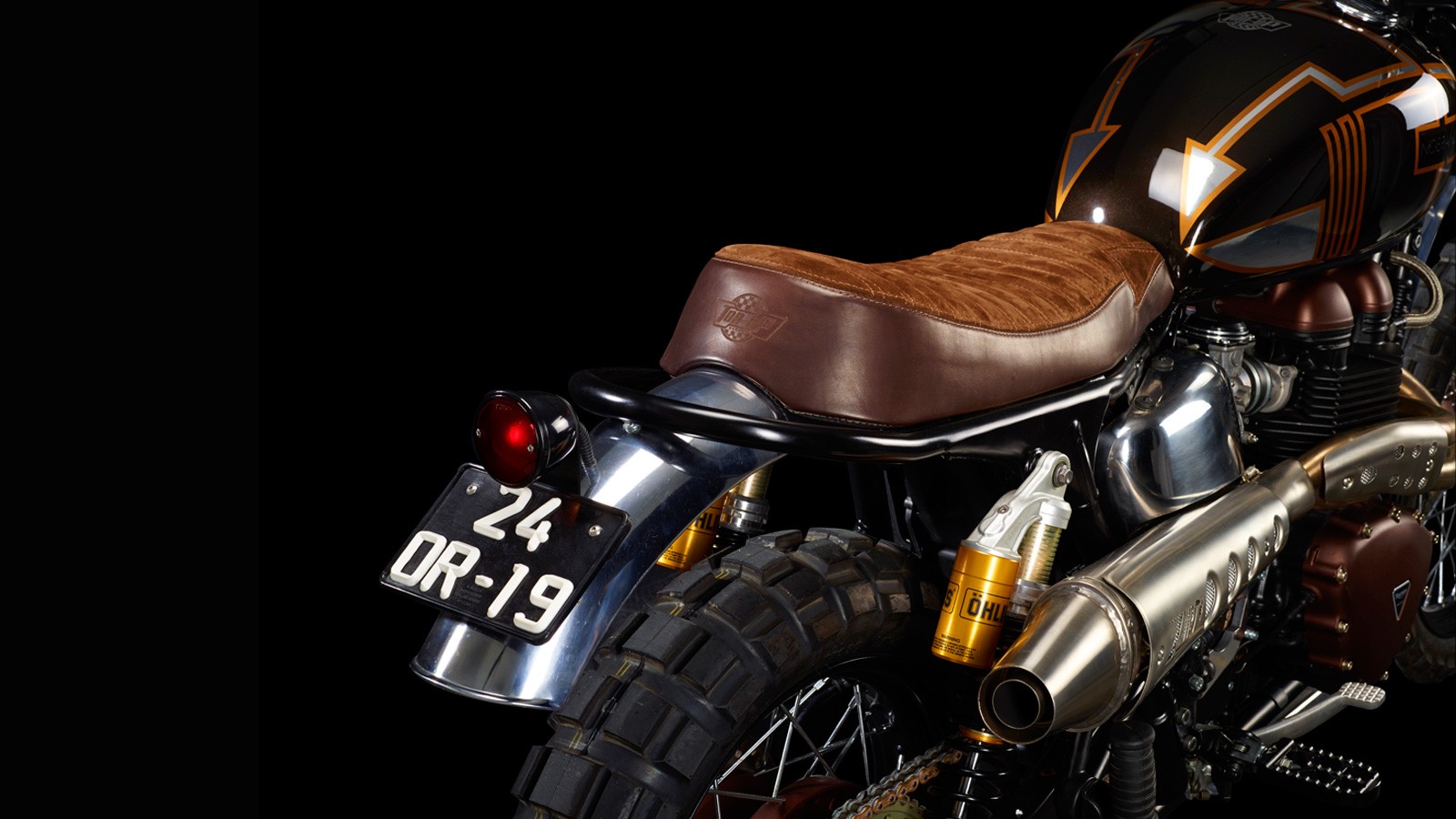 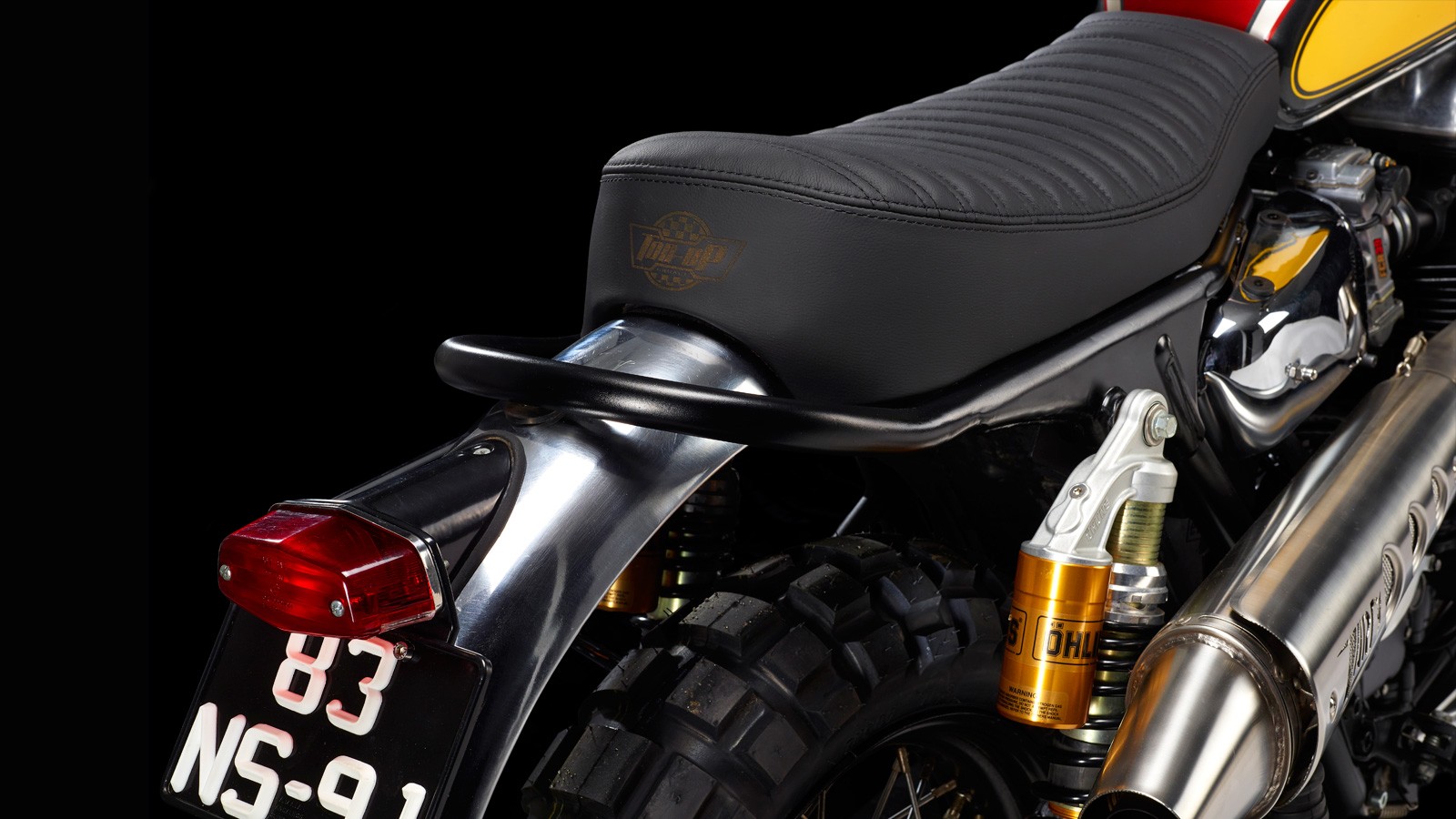 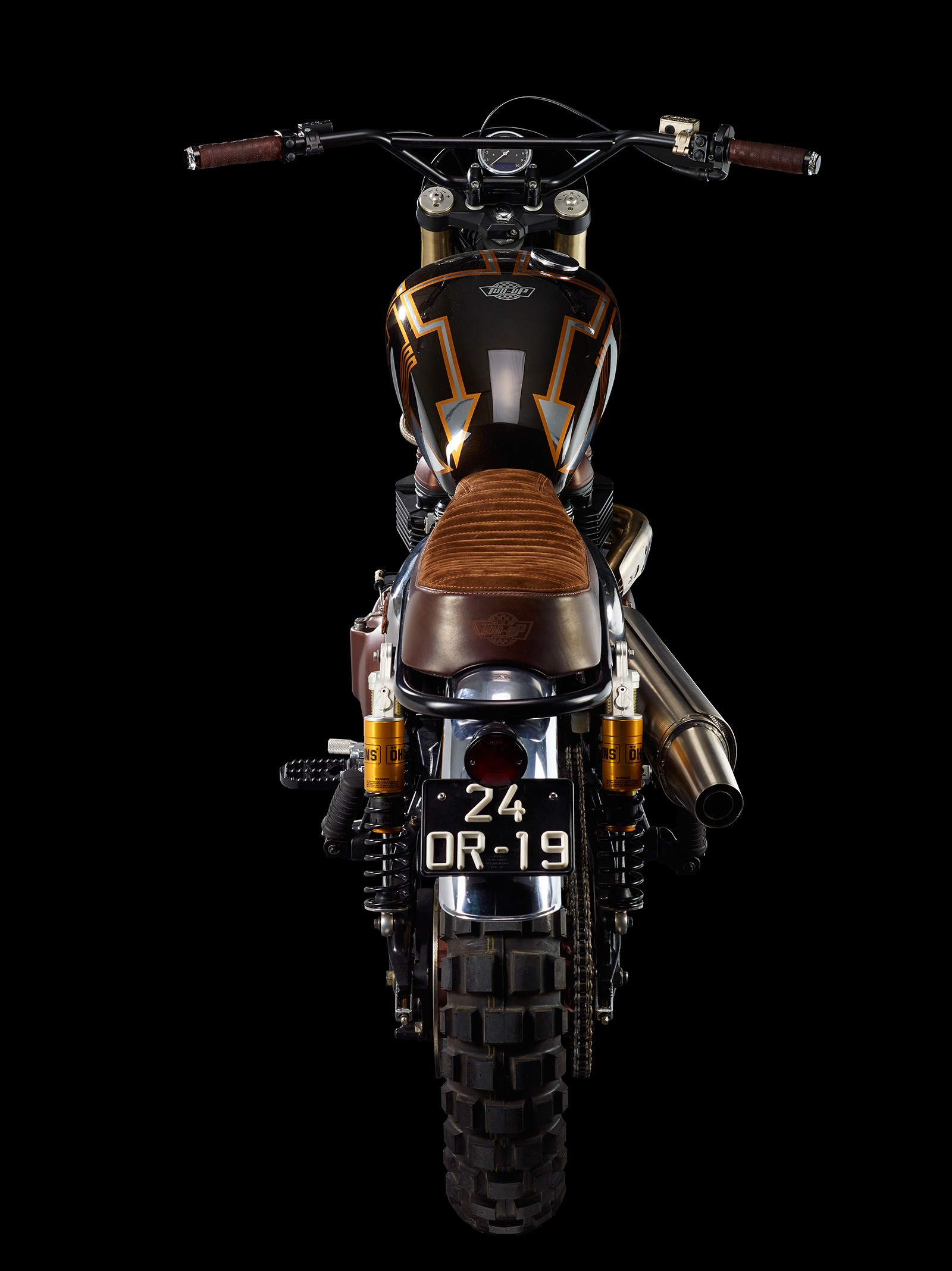 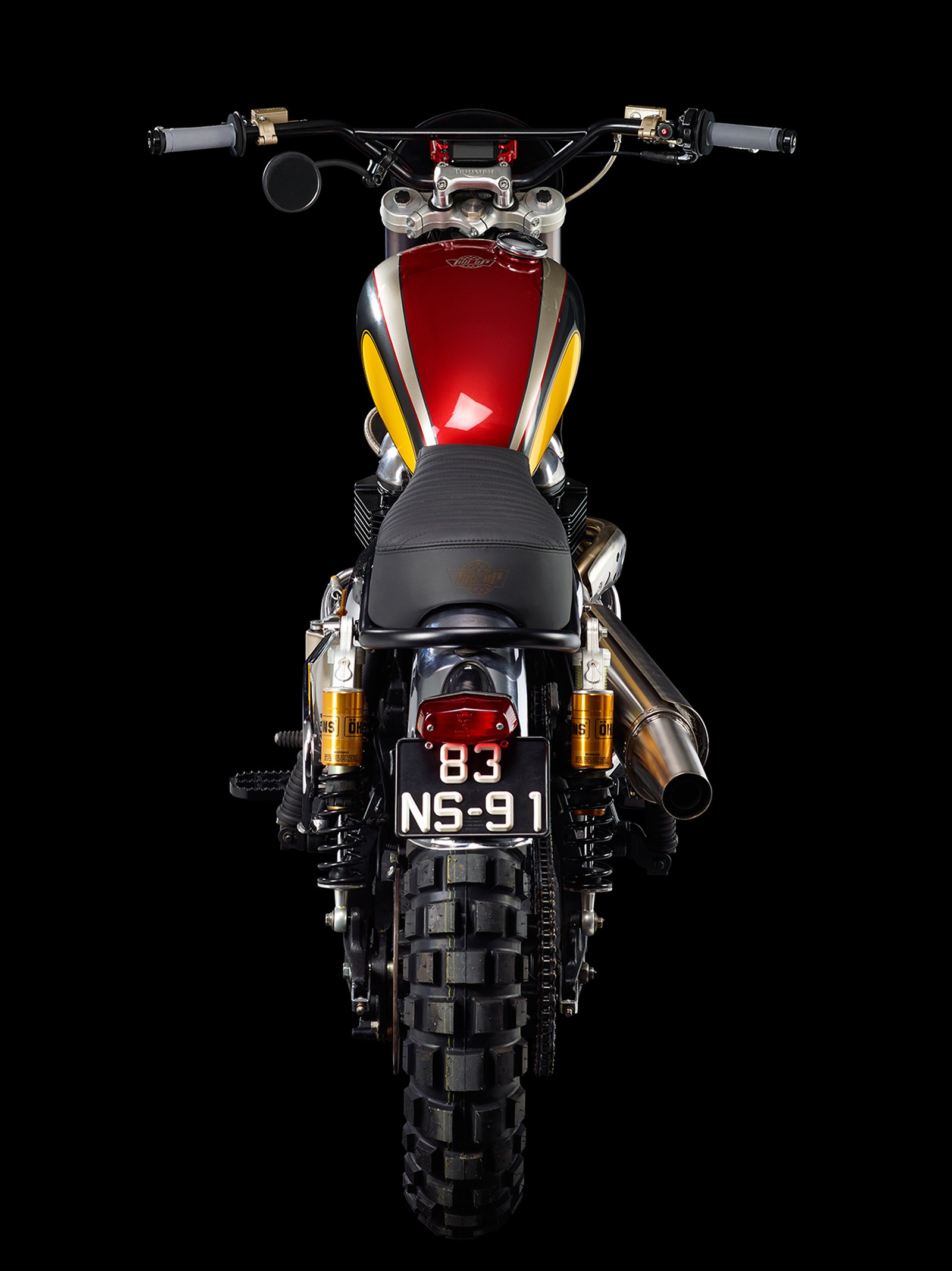 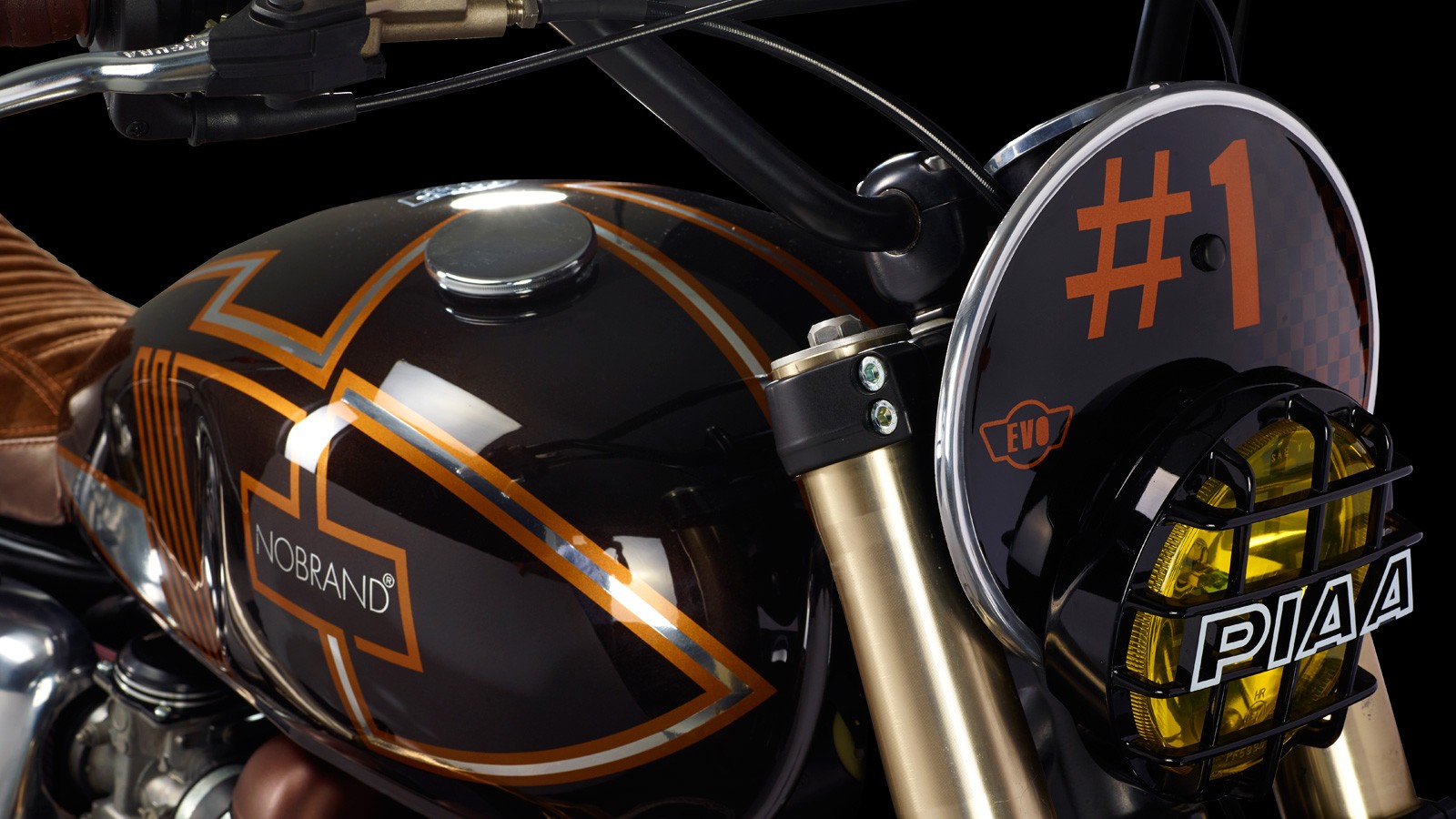 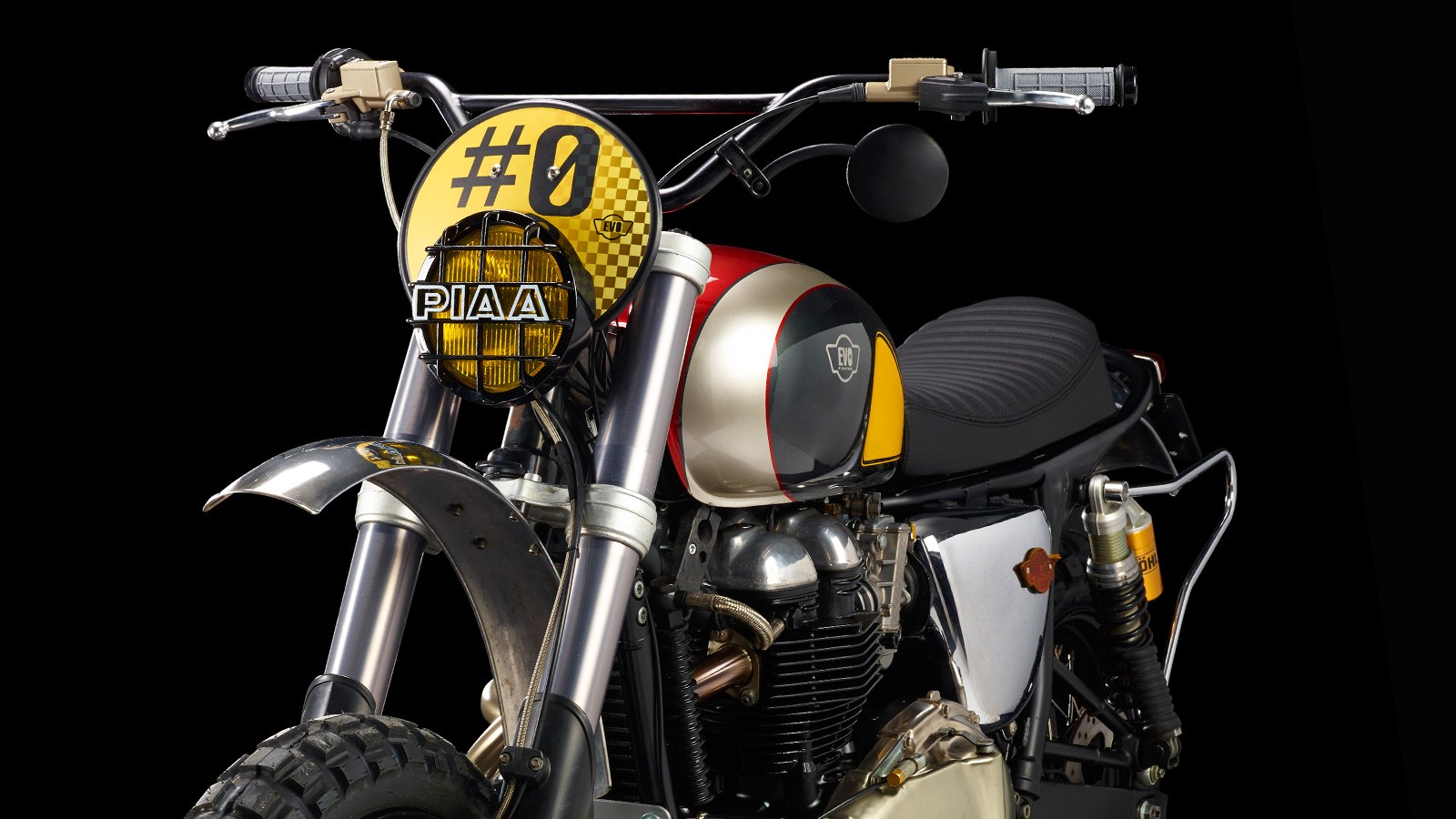 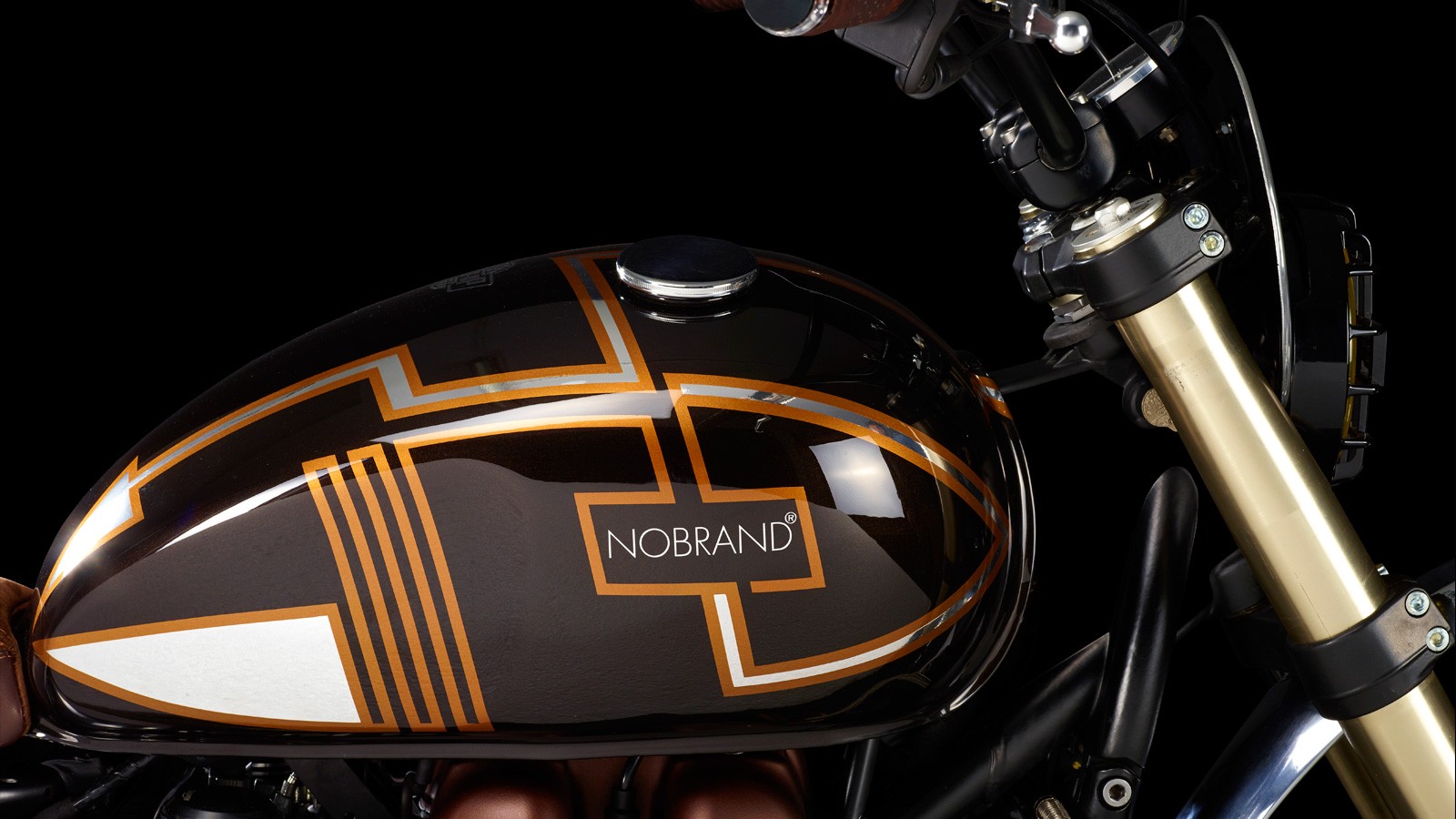 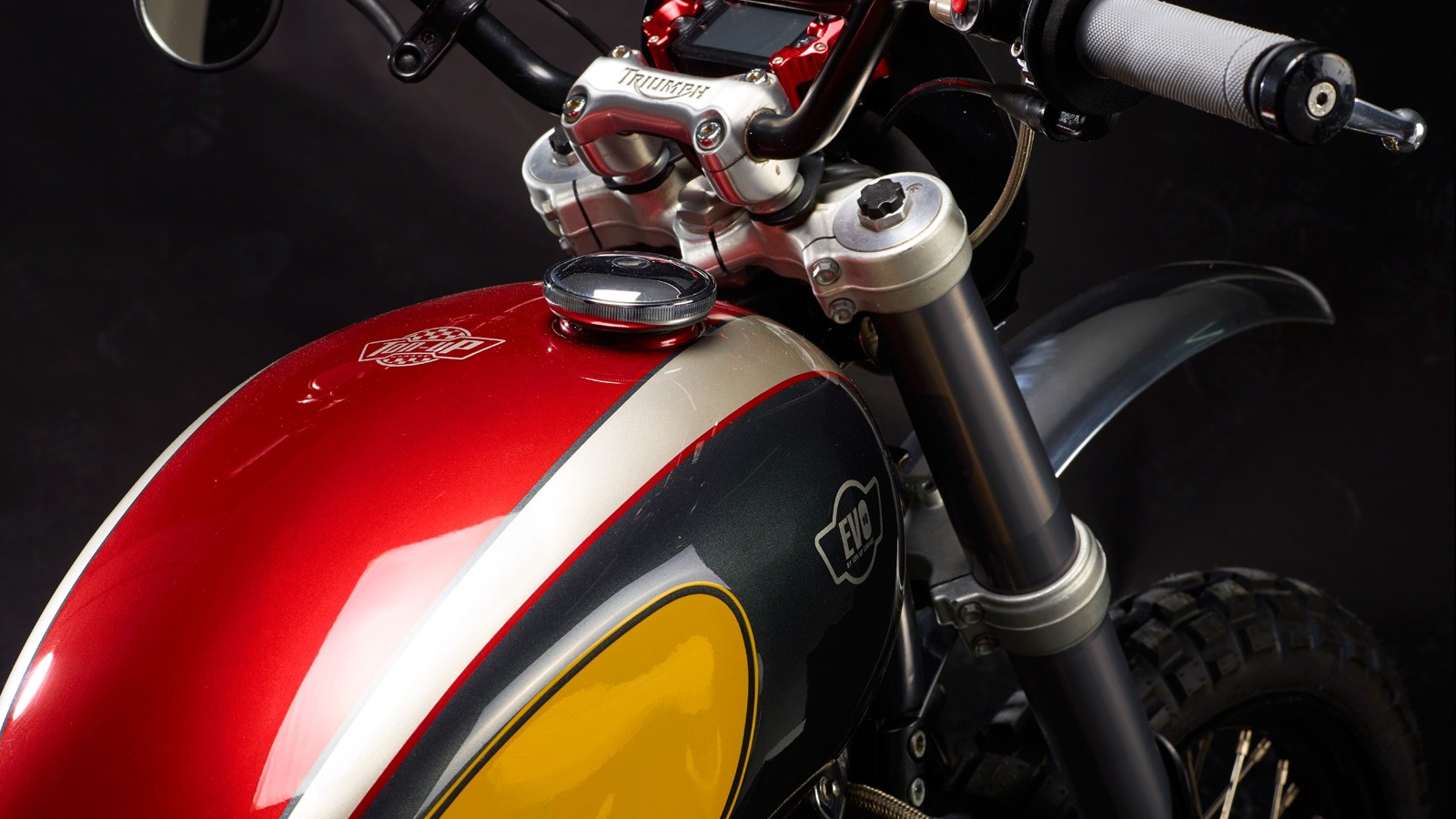 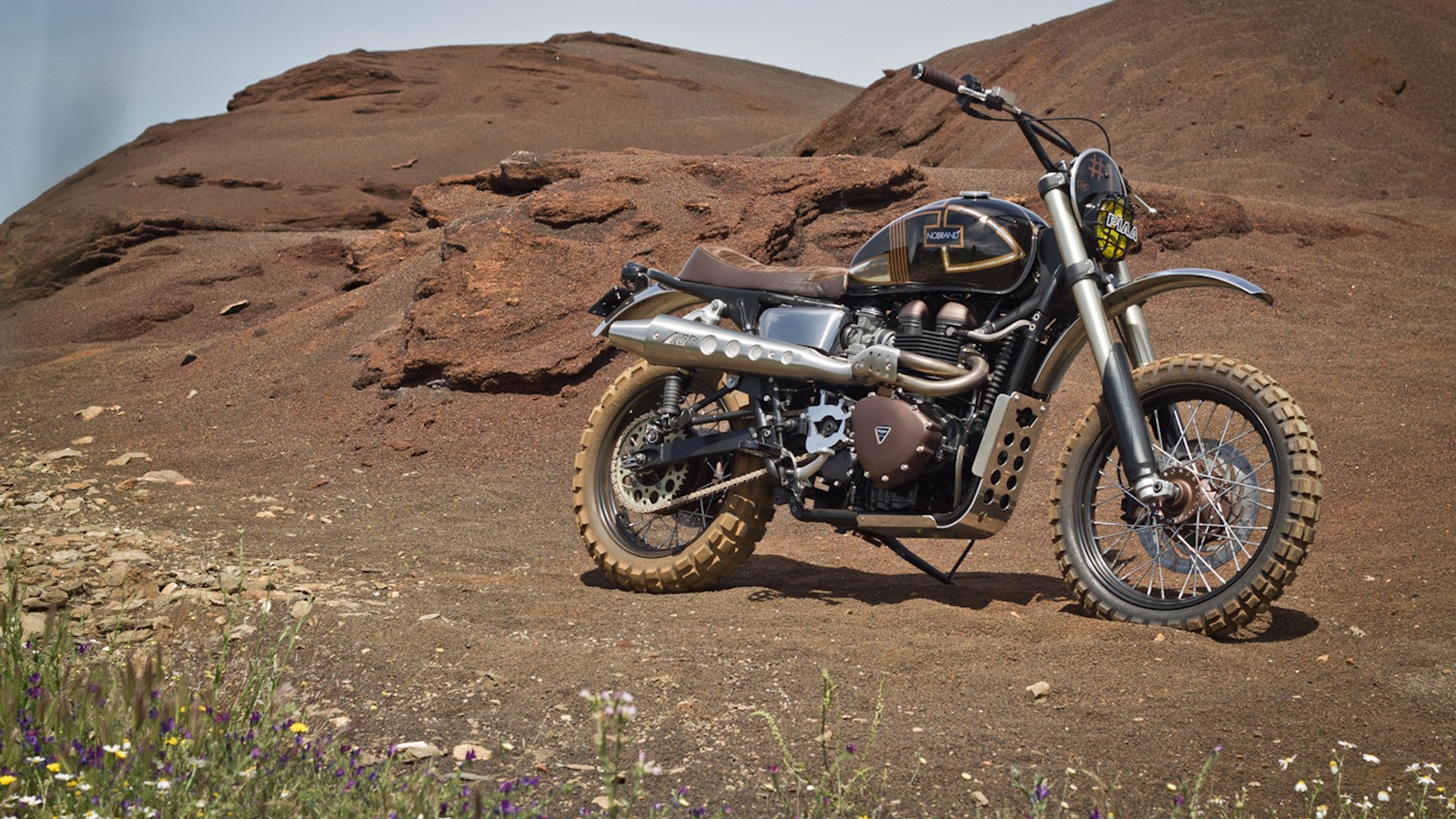 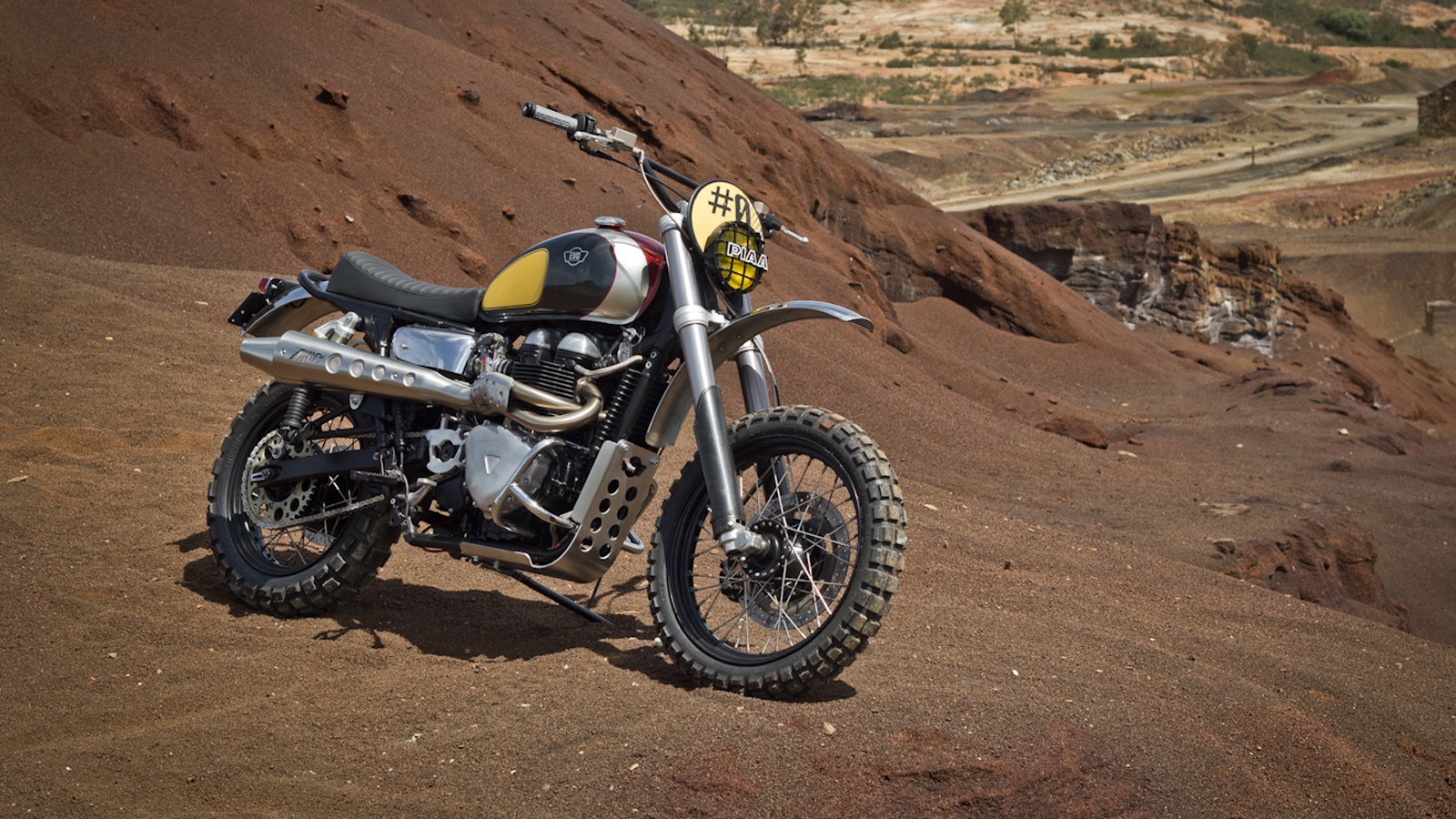 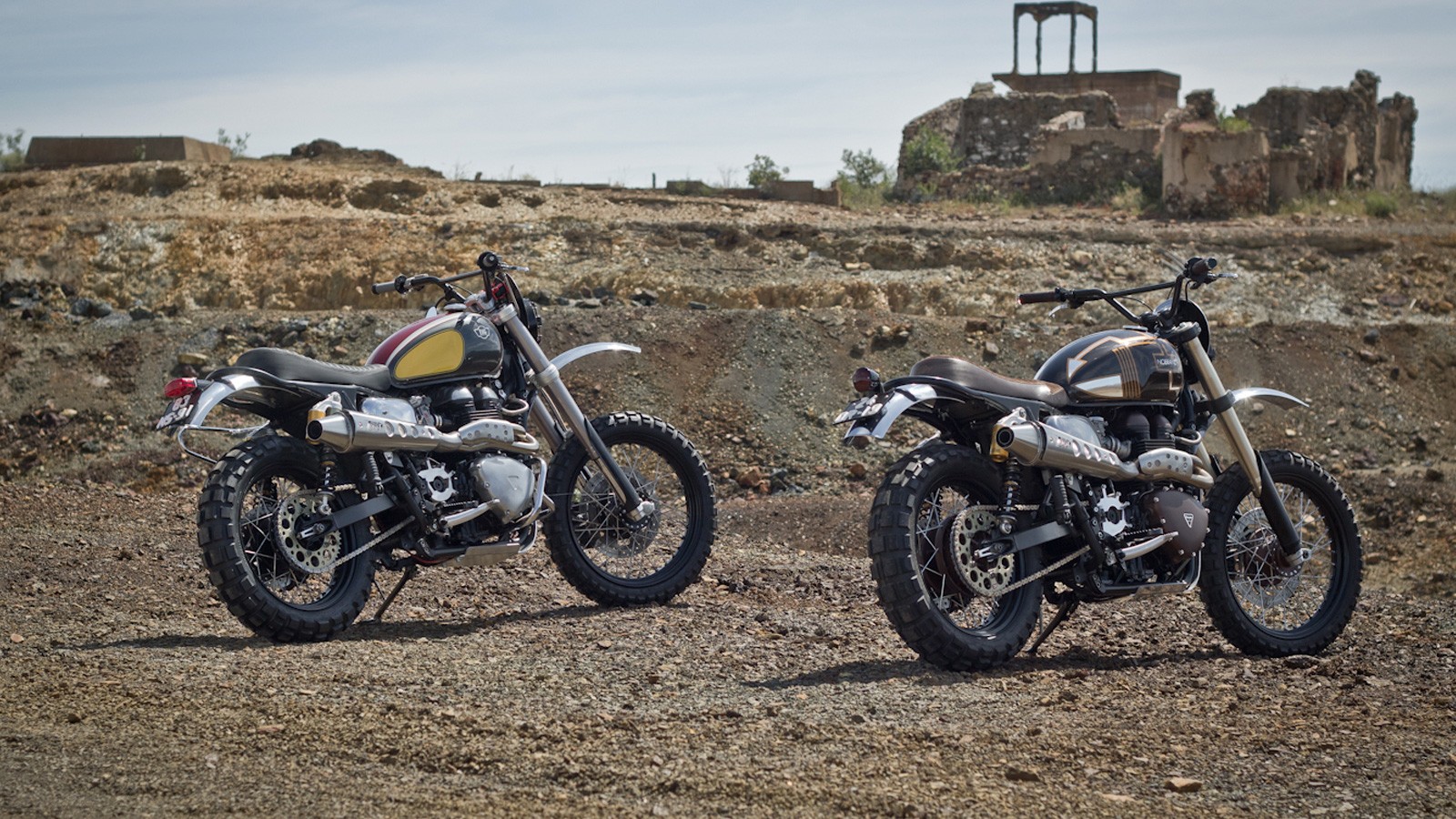 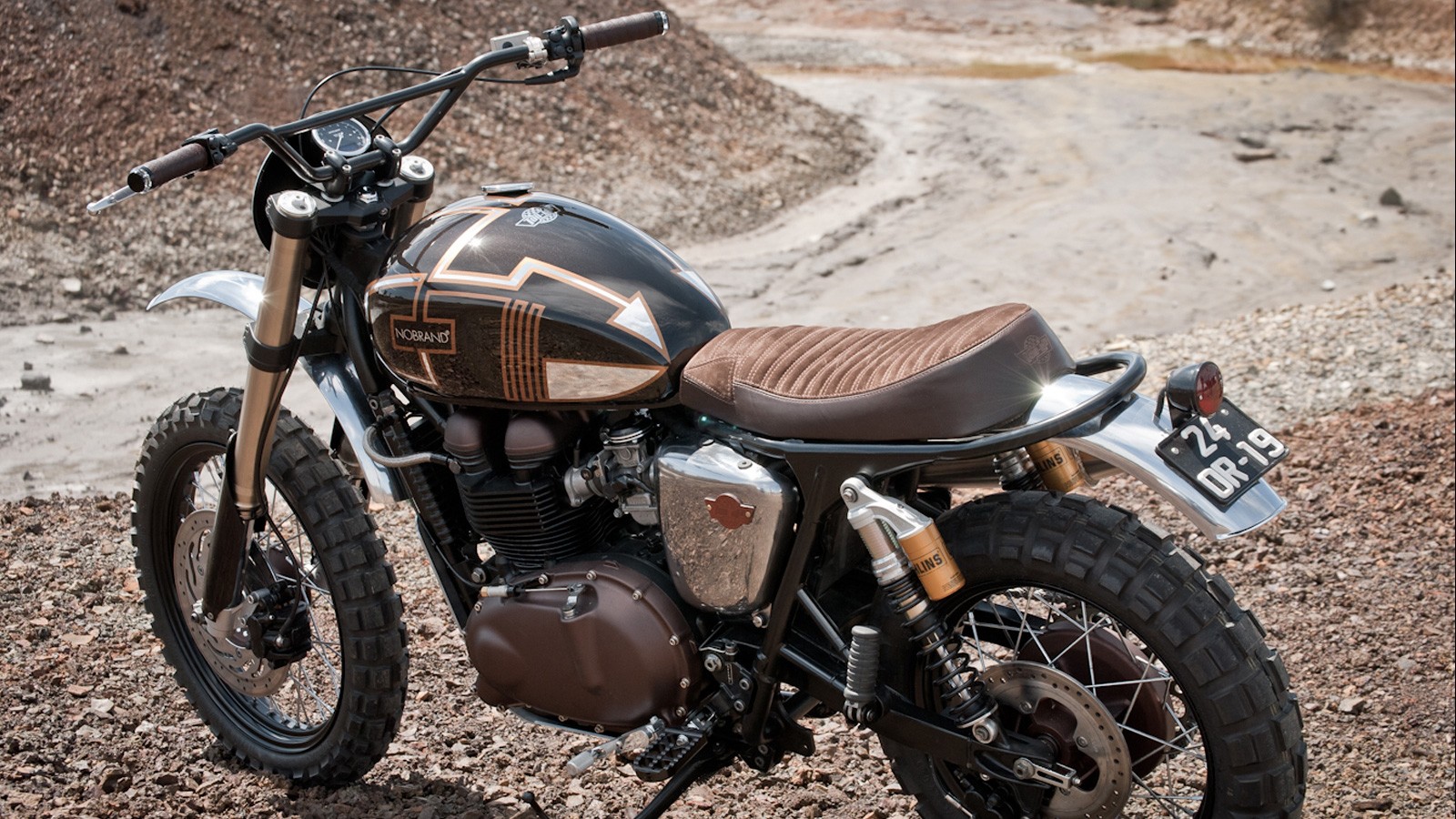 We've always been Enduro and Motocross enthusiasts riders, so we have this huge personal connection to off-road riding and racing so, this bike was a “must have/must build” for us. We've used it on off-road raids and also local races, specially in all Dusty Track editions (Dirt Track style races) and it always have been a A+.

The inspiration came from the Old Motocross Racing motorcycles, vintage off-road, Steve Mcqueen, Old-Huskies,... It was our goal to build this bike having all those motorcycles in mind that inspired us for this build. Having that in mind, we decided for the final paint scheme we used on the MX EVO #0, which we've felt was more close to our personal tastes and more inspirationally identified with. Technically we wanted to spice this engine, we wanted more power and definitely more torque to improve, above everything, the acceleration! We decided to go for a cc increase passing from 790cc to 904cc (EVO #0 was built on a 790cc Triumph Bonneville from 2005). We've fitted the FCR39 carbs and modified the ECU to increase engine rev limits. The final drive were also changed to a gold colored system and with a big sprocket to increase acceleration, resulting in a limited top speed of around 180km/h. We've also fitted a race clutch to quicken the gearbox changes.

The MX EVO #0 is a prototype that won't be sold and it will be with us for our own amusement and fun on our off-road adventures. It has been used many times on off-road rides. We've used it several times in Trail and Raids and it handles very well, keeping up with classic Africa Twins and Super Teneres. Off course it still is an heavy bike, even it's lighter than the original stock Bonneville. You still feel it's weight on more technical dirty roads but it's a great bike to take some pleasure out of it and with enough agility. This bike will stay exhibit in our store, as long the limited prodution of 9 units it's on, it will be here so that interested clients can test it.

The MX EVO #1 it's already built and delivered to the final client. In this case we've used a 2011 EFI Bonneville T100 model as donor bike. We've tuned the EFI system, but haven't touched the engine capacity, remaining it to it's stock 865cc. As you can see, the paint scheme it's different from the EVO #0, because in all the 9 units will have to be different, specially regarding the paint schemes. We won't build two MX EVO equal. All MX EVO will have an exclusive paint scheme and technically many of the options can be chosen or not (ex: carbs, suspensions, engine cc increase, race cluctch,...). The basic custom lines of this bike are defined, we can then re-custom the colours, paint schemes and techincal components. For this build we've chosen the MX Vintage rear shocks and the front suspension may be chosen, WP models, Ohlins models, etc... it will depend of the use you'll give to this bike.

In those two models we're revealing that it's clear the differences between them. With the MX EVO #0 it's obvious that it's a race model, much more suit for off-road use and adventure rides, it's also one of the reasons we've used a speedo with GPS functions, off-road tracked rides, metal engine cases, side engine cases protections, to prevent damages in case of fall. No indicators fitted and the all bike it's much more minimal and simple. The MX EVO #1 it's a much more classic model. It has the engine and engine cases painted, more classical colors were chosen, indicators to suit a legal road use, classic speedo, seat upholstery much more refined, where we've used special leathers. In conclusion, an exquisite approach, much more refined and the clear intention to build a much more classic and shinning model of the MX EVO so that future interested would know that: this bike as both the potential of being more race line and aggressive, as being more classic and refined. On both bikes we've fitted our own Ton-up Garage engine protector, Ton-up Garage sprocket cover.

The MX EVO have been extensively used since built on events, specially sports events and big fashion industries events. The MX EVO #0 has been in all Dusty Track races editions. Both MX EVO #0 and #1 appeard in the NOBRAND shoes catalog and videos along with others bikes we've built. The MX EVO #0 was used by Vicri at the Portugal Fashion and also in the video campaign of the Lightining Bolt clothes collection.